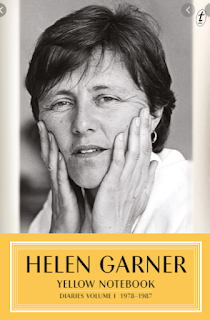 I would honestly read Helen Garner's shopping lists if she made them into a book, so naturally I gobbled up Yellow Notebook: Diaries Volume 1, 1978-1987. The most exciting part of that title is Volume 1!! How many more juicy volumes can we expect, I wonder?

I kept a faithful diary all through my uni years but it gradually dropped away as I a) grew happier and b) had kids. Part of the thrill of reading Garner's diaries for this period was that during the mid-80s we were living in overlapping worlds: walking the same inner Melbourne streets, shopping at the same bookshops, even going to the same nightclubs (occasionally). It's hard to tell but perhaps we even lived near each other, or passed each other in the street.

It's weird reading someone else's diary, even when it's been carefully edited like this. Her closest associates are disguised but little snippets of celebrity-spotting peep through (she meets a young Noah Taylor in a nightclub). There are flashes of subjects that will later become central to her writing -- violent crime, spirituality, and of course the abiding interest in personal relationships. Garner's second marriage broke down during this period, and she had other relationships.

As usual, her writing sparkles, and it's hard to read her self-berating laments, when she sees herself as untalented, plain, unlovable. It's the stuff of most diaries, mine anyway, and in a way it's reassuring that even the most brilliant of people can be so besieged with self-doubt. Reading this book was like grazing on delicious appetisers -- not a solid meal, but nourishing all the same.
Posted by A latte beckons at 11:08 AM