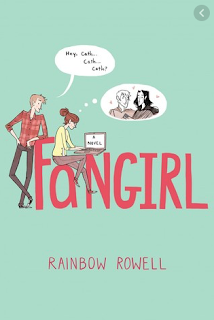 I was excited to read Fangirl. I was definitely a fangirl in the making, but a solitary one. I wrote a version of what would now be called fanfic, though the term didn't exist when I was writing it, and I never shared what I wrote with anyone. In Rainbow Rowell's book, Cath writes fanfic about 'Simon Snow' (a thinly disguised Harry Potter figure, though I believe Rowell went on to write some actual Simon Snow novels -- how meta is that!). My own preferred universes were Doctor Who, Blake's 7, and All Creatures Great and Small; somehow I managed to create a mash-up universe that could contain all these worlds in a more or less coherent narrative!

However, Fangirl isn't really about fandom as such. As one Goodreads reviewer pointed out, what's missing from this story is the community of fandom -- something I never really experienced. That being said, I  could relate to Cath's painful social insecurity, her avoidance of interaction with her fellow students, taking refuge (and delicious delight) in the world of Simon Snow, partly in her own head, partly constructed by Gemma Leslie. Even Cath recognises that her immersion in Simon Snow's world is an addiction.

Meanwhile Cath's twin, Wren, has broken away from their previously shared obsession with Simon and his vampire nemesis, Baz, and has taken the path that I took myself when I started uni (college) -- boys and alcohol. I deliberately went cold turkey on my own private universe, one of the most painful decisions I've ever made. Wren goes off the rails, and is reined in my her concerned father (this never happened to me, though I went way further off the rails than Wren does).

In the end, I was left slightly unsatisfied by Fangirl. Cath never resolves her issues with her absent mother, and she has a sweet, perfect boyfriend and a new best friend delivered into her lap by fate (college room-mate plus room-mate's ex). She never really engages with the implications of burying herself in Simon Snow's world, though by the end of the book she is beginning to write about other things, which is evolution of a kind, I guess.

I was left feeling that there is a more interesting book to be written about fandom, about living inside your own imagination, its costs and treasures. Hm, maybe I might have to write it myself...
Posted by A latte beckons at 10:57 AM