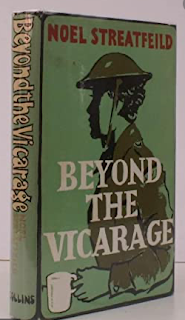 I knew that Streatfeild had written novels for adults as well as her huge output for children, but I hadn't realised how many she'd written. Several of her adult titles were lost when her publisher's warehouse was bombed during the war and the printing plates were destroyed, so I guess we'll never know exactly what they were like. It surprised me that Streatfeild was rather dismayed by the sudden success of Ballet Shoes, which has of course remained immensely popular and really set herself up as a children's author. In the fifties she decided to give up writing for adults, sensibly understanding that her style of adult novel was going out of fashion in an over-supplied market, and from then on focussed entirely on writing for children.

Like Nancy Mitford, Streatfeild's writing strategy was to write in bed for a few hours before getting up -- that way, naughty friends couldn't entice her out on excursions until she'd done her work for the day. It was fascinating to read about her experiences in London with the WVS during the war, running a mobile canteen which travelled around to bomb shelters providing hot drinks and food. She saw some terrible sights and her lovely flat was completely destroyed. I must say, reading about the horrors of wartime London (and, as Streatfeild points out, things were far worse in Europe) puts our pandemic whinges about border closures and isolation into perspective.

Beyond the Vicarage ends with Streatfeild sliding into comfortable old age. She was to live for another fifteen years, dying at the grand old age of one hundred: a pretty good innings.