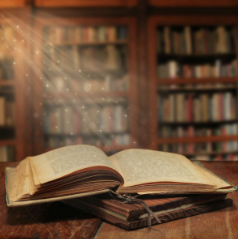 Thank God that year is over -- though 2021 might be just as difficult, who knows. Getting through 2020 for me was all about comfort reading, jigsaws, knitting, and riding my bike through empty early morning streets. So last year featured lots of children's books and lots of re-reading of old favourites, both of which I am completely unapologetic about.

For most of the year I had three books on the go simultaneously -- one children's or YA, one adult fiction and one non-fiction book. I think my concentration was a bit all over the place and it was easier to hop from book to book, chapter by chapter, than try to maintain my focus for a whole book. Maybe this is just modern life, maybe it was COVID, anyway it seemed to work. I read a total of 85 books this year, seven fewer than last year. 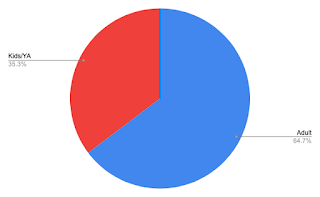 I read 30 children's and YA books, and 55 adult titles (which does work out to about a one third/two thirds ratio, as mentioned above). Mostly I read children's books, I wasn't really in the mood for YA this year, I needed comfort and reassurance, and the majority of those children's books were plucked from my own shelves. (Oddly, I read 9 fewer kids books this year, though I felt as if I read more!) 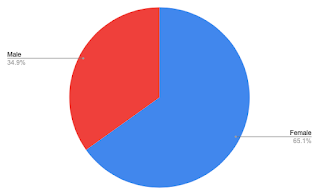 Another one third/two thirds split! 56 books were by female authors and 29 by males, and about one third of those were by one author, Alan Garner. It did work out to slightly more books by blokes this year, but the proportion is fairly steady. 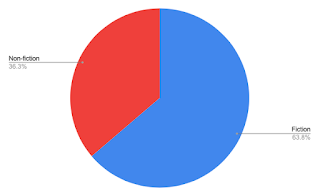 My impression was that the need for escape drew me toward fiction this year, and again the three-books strategy led to a rough one third factual, two thirds fictional split. Actually, comparing to 2019, I'm surprised to see that I actually read more non-fiction in 2020! Fiction was 51 (down from 63), non-fiction 34 (up from 29).
Book source 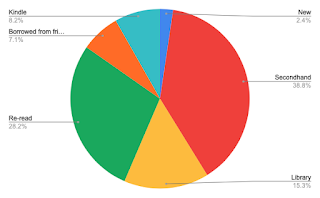 I bought only two new books this year (I actually bought a lot more than that, mostly for my children) (down 12 from 2019); my daughter and I invested in a mystery box of books from Book Grocer which actually ended up being pretty poor value, for me, at least. Oh well, it was still exciting to unpack the box!

33 books were purchased secondhand (down 7), all from Brotherhood Books, some leftover from last year and some bought through the year. I managed to borrow 13 books from the library, despite lockdown (down from 24). A whopping 24 titles were re-reads that I already owned (up 20!). I borrowed 6 books from friends (down 3), and bought 7 e-books on the Kindle (up by 5 -- instant gratification was particularly important this year!) 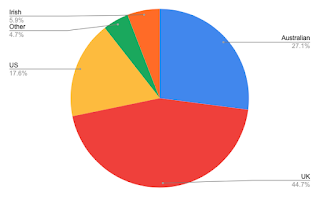 Because of all the old favourite re-reads, UK authors were heavily featured this year with 38 titles. Next came Australian authors on 23; US writers with 15 books; one Irish author, Tana French, with five titles; and four authors from assorted other countries (Finland, Germany, Japan). I haven't done a very good job of reading foreign books lately!

The year began with the tail end of a Noel Streatfeild binge, and progressed with binges of several other authors, notably Tana French (5) and childhood favourite Elizabeth Enright (6). I had intended to re-read all of Alan Garner's books this year but I didn't quite manage it -- I read nine of his works and still have a couple to go which I'll finish off this year. I had a Jane Austen mini-binge as well, starting with a biography that sent me scurrying back to her novels. (I'm looking forward to re-visiting Pride and Prejudice when my remaining school age daughter studies it this year.)

In spite of all the comfort reading and re-reading, my standout reading experiences were actually mostly non-fiction, and mostly by Australian authors. Sarah Krasnostein's The Trauma Cleaner and Chloe Hooper's The Arsonist both made a deep impression early in the year. Judith Brett's From Secret Ballot to Democracy Sausage was both educational and thoroughly enjoyable. I lost myself in Richard Fidler's Ghost Empire, and as usual was bewitched by Robert Macfarlane as he took me Underland.