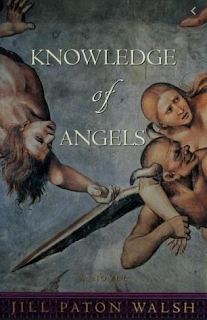 I'm embarrassed to say that it took the death of Jill Paton Walsh late last year to bring her to my attention. I had never read any of her books before, though I've since been assured that Goldengrove/ Unleaving and A Parcel of Patterns will be right up my alley (now on the hunt), and I'm also looking forward to reading her Lord Peter Wimsey novels.

I wasn't aware, either, that she'd almost won the Booker prize for Knowledge of Angels, which despite being an established author, she had to self-publish. This is a beautiful, cruel and shining book that chimed well with Hilary Mantel's The Mirror and the Light (where heretics are also tortured for their beliefs) and also, oddly, with the jigsaw I was working on at the time: 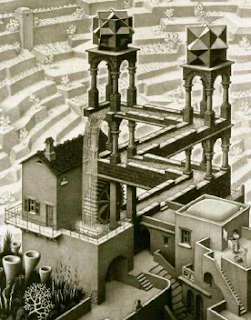 Escher's Cascata captured the austere, medieval feeling of the book perfectly. At first I read with delight of this Mediterranean island, with its olives and snows, its sparkling seas and serene nuns, each image as rich as an illuminated manuscript. I was intrigued by the discovery of the wild wolf-child and the arrival of the civilised stranger, naked from the sea. For a while, all unfolds peaceably. The stranger, an atheist, disputes philosophy with the learned ruler and the scholar; and the snow-child is slowly tamed.

But then the inquisitor arrives, and everything turns dark and senseless and brutal, and I read reluctantly, knowing what the inevitable end was going to be.

Knowledge of Angels was written under the shadow of the fatwa on Salman Rushdie, but it takes faith seriously. Neil Philip has said he doesn't consider this book her finest work, because it lacks humour, and I could see what he means. Still, this is a novel that will haunt me for a long time.