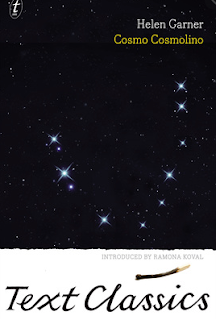 I was spurred to re-read Helen Garner's 1992 novel, Cosmo Cosmolino, after reading her references to wrestling with 'my angel novel' in the latest volume of her diaries, and also how its publication lost her a treasured friendship (not permanently, I believe).

I read this novel when it was first published, living in a share house in the inner suburbs, quite lonely and probably depressed, working alone on my own writing but not feeling as if I was getting anywhere (like Maxine, the artist/carpenter, I was working in a glorified backyard shed). Cosmo Cosmolino did little to cheer me up at the time. I remember my response being bafflement and a vague disappointment; I didn't get what Garner was aiming at, and parts of the novel upset me deeply.

Reading it again, I have a greater sympathy for her portrait of three lost souls, drifting past each other in an empty house, accidentally hurting and misunderstanding each other, all craving meaningful connection but struggling to achieve it. It's not until the very end of the book that hope arrives in the form of Alby, who manages to draw them together (with a long, perhaps invented story) and ends up joining them in what the reader senses will now be a household, rather than just a house with random inhabitants. It's really a novel about faith, belief and connection, and how hard it can be to trust -- to trust oneself, to trust others, to trust in a greater pattern or power.

At the time Garner was widely derided for talking about the 'mighty force' she had experienced, described in the novel as haunting Janet (who is surely a thinly-veiled Garner) in the shape of a dark column hovering behind her shoulder. It's a powerful image, whatever it represents. In her diaries, Garner seems to accept Tim Winton's characterisation of it as the Holy Spirit; but in the novel, Janet resists its power with all her being and finally seems to defeat it.

In many ways, Cosmo Cosmolino is a deeply bleak novel. But the ending is a joyous blast of hope.