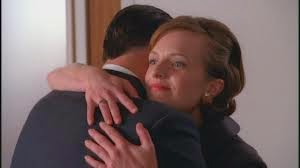 I'm sorry, Peggy and Don, but this might be one of those times. And I suspect Matt Weiner knows that too.
Posted by A latte beckons at 11:06 AM No comments:

A Break In Transmission

Things have been quiet on this blog lately. There is a reason for this. Not long, ironically, after writing a  post about the delights of writing in bed, I found myself in hospital for a week, mostly in bed, and then recuperating quietly at home, which has also involved a lot of bed and couch time. Talk about being careful what you wish for…

It seems I'm not the only person in this position. I concur with Michelle that what you want when you're not feeling well is something fairly light to read; for me, that was the Agatha Christie compendium that I had fortunately acquired not long before I ended up in hospital. I can also recommend New Scientist magazine, kindly supplied by my friend Elizabeth, which was the perfect blend of interesting longer articles and fascinating snippets of science-y news.

Since I came home, I've been reading steampunk books in preparation for my next book group session on that theme. But I must admit to feeling a certain restlessness with my reading matter. And I think I've worked out what the problem is. You see, I like to keep my reading material in a fairly even balance of YA/kids books, adult fiction, and non-fiction books. Looking back over my reading diary, I see that I have been reading nothing but fiction for some months. Clearly I'm in need of a shot of non-fiction!

A visit to the library is clearly in order. Unfortunately I'm not allowed to drive just yet, and I don't feel quite strong enough to walk there. I'll just have to wait for someone to drive me...
Posted by A latte beckons at 11:02 AM No comments: