At the crossover between the two Irish dancing classes, all the children (it's mostly girls) dance the Heel & Toe together. The more accomplished girls help the beginners, and they gallop up and down the hall together, smacking hands, feet flying. There is something heart-gladdening in the sight and sound of the little girls dancing together, the tall and the tiny, the elegant and the clumsy, hand in hand,

We pack our things to go while the second class lines up for the reel. They jump and stamp in unison, and the soft thunder of their feet trembles the floor as we leave.
Posted by A latte beckons at 8:14 AM No comments:

It's raining in West Preston. Sweet, blessed, misty rain. I haven't opened my umbrella for so long I was scared it might be full of spiders. (Melbourne has had a measly 2 millimetres of rain since Christmas.)

The children in the school playground were wandering bare-headed through the droplets, soaking up the damp wonder of it all.
Posted by A latte beckons at 9:12 AM 1 comment:

Lots of people want to know, what happens after the end of The Tenth Power? Is Calwyn pregnant? What happens when she and Darrow return to Merithuros? What about Samis? And what about after The Taste of Lightning? What becomes of Skir and Perrin and Tansy and Elvie? What exactly are Calwyn and Darrow up to?

And the answer to all of that is... I don't know! Well, I have a few vague ideas. But I would only know precisely if I sat down to write the sequel, and even then the answers would probably change while I was writing.

In an ideal world, I would love to write a sequel to The Taste of Lightning, where Skir and the others travel to the Westlands and meet up with Calwyn and Darrow. I want to explore the relationship between Tansy and Perrin, and find out how Skir and Elvie work out, as well as probing all the family stuff (too spoilerific for people who haven't read TOL...)

I'd also like to write a story about Calwyn's daughter, set between Tenth Power and TOL. I know she's called Dimica, and she isn't a chanter, and she finds life as the daughter of the Singer of All Songs difficult, to say the least. I'd love to get to know her better. I think this book would be set at least partly in the swamplands of the north - a marshy, grey and green book, maybe with a flood in it somewhere...

And the other day, Alice suggested a book about Calwyn and Darrow discovering Darrow's long-lost sister, who's also an iron-crafter. I guess this might take place just after The Tenth Power. (Alice thinks her name is Matissa.) Hm... that would be interesting...

Maybe one day I will write all these stories. The people of Tremaris are still alive inside me, and I'm still interested in what happens to them all. I guess the fact that I don't really know their fates (unlike, say, JK Rowling at the end of Deathly Hallows) means that their stories are still waiting to unfold, still budding, unfinished. If I knew all the answers, I'd never write the books.

So for now, I'm trying my hardest not to find out. Just in case.
Posted by A latte beckons at 10:07 AM 4 comments: 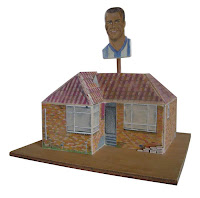 There was one piece of good news in my circle that got a bit lost last week. My good and clever friend Sandra Eterovic won second prize in the Linden Gallery Postcard Show, which attracts thousands of entries from all over the country, with this sculpture entitled "Neighbourhood Watch." Yay! So modest is my clever friend that she was going to get a haircut rather than attend the award announcement, until she was warned that it might be a good idea to go along.

Check out Sandra's blog to read about her winning piece and lots more of her gorgeous and fascinating artworks and other creations.
Posted by A latte beckons at 11:57 AM No comments:

The Victorian bushfire emergency is not yet over, and to write or think about anything else seems unspeakably trivial; yet thinking and writing and reading about it has become almost unbearable. We live a long way from the fires; we don't know anyone who's been directly hurt by them. We are incredibly, amazingly lucky.

And yet the fires are everywhere.

The air today is orange with smoke haze. The kids are waking up with nightmares. They made a pile of precious possessions to sit by the front door in case we had to flee for our lives. There is a little girl at our school whose family have been burnt out; she's come to stay with her aunt. She's part of our community now. The school is holding a gold coin casual dress day to raise money for fire victims; all the kindergartens and creches and workplaces have overflowing donation bins (way more than are actually needed). And I know I'm not the only one who wakes with a sick hollow in the pit of my stomach, wondering what fresh horror will be revealed today.
Posted by A latte beckons at 9:03 AM 1 comment:

A horrible, horrible few days in Victoria. We spent all of yesterday huddled numbly by the radio, trying to make sense of the increasingly awful news, looking up tiny townships on the map, and frantically trying to contact friends who live in one of the worst-affected fire zones (they're safe, and so is their house - just).

Over a hundred people are confirmed dead so far, but that total is sure to rise, and hundreds of houses have been destroyed. They are the worst bushfires in the state's history. The only positive aspect of the devastation has been the ready, almost automatic, generosity that people have shown - relief centres have received more donated goods than they can distribute, and the ABC website is crammed with more than a thousand offers of accommodation and help. (Thank God for the ABC, by the way.)

My parents also live in a fire-prone area (they were spared this time round, fortunately). One of my earliest memories is watching bushfires burn by night from our dining-room window, the orange flare of flames against the dark bulk of the hillside. I remember the street full of choking smoke and ash, and the fear that lurked in nightmares for years afterwards. I still have a recurring dream that fire is coming, that we have to grab what we can and flee, even though I haven't lived in my parents' house for twenty-five years.

This morning, for so many, that nightmare, and much worse, has come true.
Posted by A latte beckons at 9:31 AM No comments:

Don't tell the Onions, but I haven't done much work lately, on account of the heat (see below), and the general back-to-school and starting-kinder-ishness of our house this week. I've only had the odd moment here and there, and I didn't want to stop and start on Crowfire (or whatever it ends up being).

Which has meant that those odd moments have been occupied with mulling over the Book-After-Next. It's hardly even an idea at the moment: it's an atmosphere, a theme, a single image floating in my mind, which draws other images to it like a magnet, accreting material like a slowly-forming planet. You know you're on the right track when everything you read seems suddenly relevant to the new idea, and every dream plants a seed of a scene. It's like falling in love, when all you can think about is the newly beloved, and all you want to do is spend time with them...

But I can't. I have page proofs of Cicada Summer to read (they do look beautiful), and Crowfire to fix, and plans to make for the Next Book, before I'm allowed to work on Book-After-Next. So, temptress in the ragged silk dress, wandering your grey stone ruin in the rain - begone!

But you know I'll sneak some time with you... later...
Posted by A latte beckons at 9:27 AM No comments:

Last week it was too hot to do anything but lie in the coolest room and watch DVDs, so that's what we did. We borrowed Mamma Mia and it was brilliant ; we watched it six or seven times in 24 hours. Glorious Greek island scenery, wonderful Meryl Streep singing her heart out, all the ABBA songs you've ever loved, Colin Firth AND Pierce Brosnan (who, endearingly, can't sing for toffee)... there is an awful lot to love about this film. Yes, it's cheesy, but that's exactly what it wants to be, and it delivers perfectly.

Mamma Mia claims to be a story about a young woman's search for her father and, by implication, her identity. But don't be fooled. The title gives it away: this is a story about mothers, not fathers. Donna, the mother, is the centre of the true love story; her daughter's quest just provides the frame where it can unfold.

That's what I loved most about this film: it's all about middle-aged women, mother-aged women, having an extravagantly good time - dancing, singing, sharing, throwing tantrums, reminiscing, being bawdy: being red-blooded, loving, sexy women. The hens'/bucks' night party scenes are Bacchanalian in their wild, pagan celebration of fertility, and the older women are right there in the midst of the dancing, celebrating their own power. How often do you see middle-aged women in a movie having fun?

So this is a movie that I was happy to buy, happy for my daughters to watch and enjoy, happy to dance round the living-room to, holding their hands. Woo-hoo!
Posted by A latte beckons at 9:31 AM