A World of Girls... In the Kitchen? 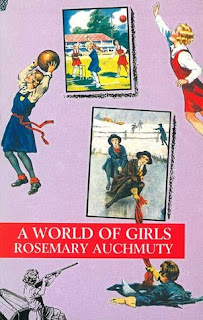 Attentive followers of my 'What I'm Reading' list will have noticed that I've been devouring lots of old-fashioned girls' stories lately, especially the ballet books of Lorna Hill (which probably deserve their own post). This was partly prompted by my picking up Rosemary Auchmuty's A World of Girls from the last library book sale. This was a fascinating analysis of the enduring appeal of girls' school stories (think The Chalet School, The Abbey Girls series etc) in the face of (male) derision and jolly-hockey-sticks satire. Auchmuty contends that these books, despite some dodgy elements, nevertheless provided their young readers with a picture of a world where women thrived, independent of men, and had real, loving relationships with each other.

I was never a huge consumer of school stories (apart from Antonia Forest, who, with respect, is in another league entirely from the authors discussed here), but Auchmuty's description of one particular book made me sit up. In Dorita Fairlie Bruce's Prefects At Springdale, the different houses of Springdale compete to show their special strengths -- one house gives a concert, another shows off their prowess in foreign languages etc. Wistaria House decides to go in for Domestic Science, and puts on a dinner party, which ends up winning them the prize.

'Hang on,' I thought, 'this sounds familiar...' and sure enough, a search of my mother's bookshelves revealed a battered copy of Prefects At Springdale, awarded to Mum as a Sunday School prize in 1948 (twelve years after its original publication).

Auchmuty's book contains a whole section on the topic of Domestic Science and its role in the school story genre. Especially after the female freedoms of the two World Wars, there was a concerted political push to encourage girls to be educated in the science of home-making, to nudge them back into their 'proper' domestic sphere. This was a source of some ambivalence in women's education and also in the school stories, though in Prefects, Dorita Bruce comes down firmly in support of girls being taught to cook and mange a household (though the actual cleaning, one gathers, would probably still be performed by the servants!)

Rosemary Auchmuty applauds (with reservations) the attempt to revalue 'women's work' by making it more 'scientific', but laments the way that girls were forced to cram in Domestic Science on top of the normal (male) curriculum of sports and academic subjects.

Having won the competition, Wistaria is awarded with their trophy -- a bonsai cedar tree. As Auchmuty points out:


Of all the images that could have been chosen to symbolise women's position under patriarchy, it would be difficult to find one more apt than this. A bonsai tree is something which is beautiful, certainly, but stunted, reduced to ornamental status to stand on a domestic shelf, certainly not fit to take its place in the might forest of real trees.

Of course, back then, Domestic Science was a subject taught only to girls. These days, Home Economics should probably be compulsory for everyone (my friend Elizabeth, who is studying to be a Home Ec teacher, might agree with this view). All students can benefit from learning about nutrition, environmental sustainability and the economics of household management. In a world of scarce resources and climate change, this is stuff we all need to know: how to live responsibly and sustainably, how the personal decisions we make about how we live (what we eat, what we buy, what we consume and throw away) affect the future of the planet. It just needs a more compelling name: Applied Environmental Ethics? Practical Life Philosophy? Any ideas?

2012 (aged 46)
I am officially an AFL tragic; I'm getting twitchy for draft day.
2010 (aged 44)
Evie: Don't say fingernail! It's an Evie swear-word.
2008 (aged 42)
Alice: I want to make a pond out of the swimming pool. Because nature is more important than luxury.
2000 (aged 34)
OH. MY. GOD.
Got the blue line in the square window this morning. I know a million things can go wrong from here and it's very very early days, but OH. MY. GOD!!!!
Charlie or Amy? Gotta get that folate supplement.
1996 (aged 30)
Xtos, B and S's joint birthday party. Danced till 3am.
1997 (aged 31)
Pulled the plug with T. He didn't try to talk me out of it. Very annoying. I cried. Afterwards.
Thank God for E (18 months) who jumps up and down and says KateKateKate when he sees me and covers me with kisses. So at least there is ONE boy who loves me.
1992 (aged 26)
Remember Edinburgh: the chippie (Rapido), the laundrette, The Pear Tree, The Green Man, Mahal, Grassmarket. Check diary. Remember hard.
1991 (aged 25)
Last night an American boy started chatting to C and me, sharing his wine etc and we ended up  going for a massive walk up to Montmatre & Sacre Coeur - gorgeous night view and the cathedral full of heavy shadows & moonlight shining through the stained glass. Long tedious tramp back, dropped into bed exhausted; an Aust girl packing her bag and a US girl chatting -- party animals -- right into "hostel life" -- nightmare. Got the train to Avignon.
1986 (aged 20)
Watched cricket. C rang, bored. Rang J to see what's happening about this bloody party - can get a lift down but then she's disappearing with F so I'm stuck. Might ask G for a bit of floor at his place? He is the only reason I'm going. Bet he doesn't even talk to me.
1985 (aged 19)
I'VE GOT A JOB! Swagman rang, I start on Thursday night. I have to bring my own bottle-opener.
1978 (aged 12)
We got up at 6 o'clock to drive to Nana's. It was so rainy, it broke the record for five years! Nana and I had a philosophical discussion.* I played with the cards most of the time.
*Arguement!
1977 (aged 11)
We went to the library and the market. Mrs Findlay blow-waved my hair. The Heralds have a new dog. It's a gorgeous puppy. I read a lot.

Posted by A latte beckons at 11:46 AM No comments:

Just when you thought the award season was safely over...

The shortlists for the NSW Premier's Literary Awards for 2012 were announced on Monday, and I was humbled and delighted to learn that Crow Country has been shortlisted for the Patricia Wrightson Award, for children's literature.

I wish I had more time to write about this properly, but I'm supposed to be working on a copy-edit and I'm on a strict deadline! But I just had to comment quickly on how special it feels to be nominated for an award named after Patricia Wrightson, and particularly for this book.

Patricia Wrightson is best remembered for her children's books which drew on Aboriginal myth and folklore to create a truly Australian literature, in a time when many books for children were firmly rooted in an inherited British culture. Many readers of my generation grew up on her evocative and beautiful fantasy stories. As time has passed, some have questioned whether Wrightson's use of indigenous material was in fact "appropriating" or "controlling", and when I set out to write Crow Country, I had to ask myself the same question about my own exploration of Aboriginal myth and philosophy. I don't have time to discuss this in much depth here, but Matthew Finch has written a fascinating series of posts on his blog which talk about Wrightson's project, and her legacy, in more detail.

It is of course a complicated, sometimes fraught, and difficult area. But these are conversations which we need to keep having. And meanwhile, I feel deeply honoured that one of my books is up for a prize named in memory of one of Australian's best children's writers, a wise woman who thought long and hard about our connection to this land, its first people, and its magic.
Posted by A latte beckons at 1:25 PM No comments:

As part of my research for my next book, I've been reading Janet McCalman's fascinating history of the working-class inner Melbourne suburb of Richmond, Struggletown. She charts the ebb and flow of poverty and prosperity through the twentieth century, the impact of war and depression and changing social mores on the lives of Richmond's inhabitants, from 1900 to 1965. Published in 1984, the photos show how much Richmond has changed and become gentrified even in the last three decades.

As I read, it struck me that the book closely traces the course of my own grandmother's life. Doris was born in 1905 in North Carlton, and as a young woman worked in the 'rag trade' for one of the dressmakers in Flinders Lane (as did some of the Richmond interviewees). She was a child during World War I, but when the Depression hit she was married with a young family, living in Thornbury; they were lucky that my grandfather kept his job, and the extended family were able to help out. My grandfather didn't fight in the Second World War; the family story (half-joking, or perhaps not!) is that 'Nana wouldn't let him.' Or perhaps his job as a clerk with Dunlop Tyres was regarded as essential? In the 50s, my grandparents moved from the inner suburbs to a new house in Cheltenham, where they lived for most of the rest of their lives. And finally at eighty, Doris moved in with her youngest daughter (my mother) and her husband, and she lived with them for ten years, until her death in 1996.

Nana was definitely what Janet McCalman would categorise as a "respectable" type.


As I read this list, I couldn't help thinking, yep, that's Nana. Like many of the "respectable" Richmond residents interviewed by McCalman, she disapproved of alcohol and feared the destructive effects of alcoholism. She lived within a narrow hedge of conservative social rules, which led the adolescent me to argue passionately with her. (To be fair, I think she quite enjoyed those arguments; she was so convinced she was right, I never made the slightest dent in her self-assurance.) It seemed to me that she was anti-sex, anti-pleasure, even anti-nature (she didn't like trees) -- opposed, almost on principle, to anything that could be construed as fun.

But in hindsight, I can see that those rigid, self-disciplined rules must have given her security, and perhaps protected her and her family during the hard times she'd lived through. Nana was nothing if not stubborn, and this inflexibility used to drive me mad, but that iron will must have helped her to survive.

And she did know how to have fun. As a young woman, she acted in radio plays, sang in choirs and toured rural towns with a theatrical group. She used to boast of modelling clothes for clients at the fashionable dressmaker's where she worked before she married. My Nana, the supermodel! (As she was a tiny woman, less than five feet tall, I doubt she would have cut it on the catwalk these days.)

I wanted to read Struggletown to learn about Melbourne history, but it's also given me an insight into my family history and psychology that I wasn't expecting to gain. Well worth reading.

Posted by A latte beckons at 11:21 AM No comments: