Big sobs in our living-room last night as the delectable David Tennant signed off as the tenth Doctor Who. Despite my lifelong loyalty to Tom Baker (no 4) and Peter Davison (no 5), DT takes out my award as Best Doctor Ever. The perfect blend of intense, funny and drop dead gorgeous, he's going to be a hard act to follow. Good luck, Matt Smith - you're going to need it. Though I have to say, I'm slightly disturbed that the Doctor is now being played by an actor who was born a couple of years after I started watching the show... But hey, that's the paradox of time travel, isn't it?

And also much happy this weekend when Penni and I visited The Younger Sun bookshop in Yarraville to talk about Dear Swoosie (and sundry other topics). We got the girls to guess which of us wrote India and which wrote Poppy (they got it right). The cupcakes were delicious, the girls were delightful, and Kate was very welcoming. It was so lovely to meet a bunch of keen readers who were so enthusiastic about sharing their love -- not just for our books (though, hey, that was nice, too!) Thanks for having us!
Posted by A latte beckons at 11:41 AM 3 comments:

Confession time: I love the Mitfords with a passion. For the last week I've been utterly lost in this mammoth book of letters between the six sisters, spanning almost eighty years of hilarious, poignant and always fascinating correspondence.

For those who aren't familiar with the Mitford family, a quick summary:

1) Nancy
Witty, biting comic writer; author of The Pursuit of Love and Love In A Cold Climate, lightly fictionalised and screamingly funny accounts of her own youth as a daughter of a shabby, quite mad English aristocrat (he used to hunt the children with hounds). (These were the books that made me fall in love with the Mitfords.) After an unhappy marriage, moved to France to be near the love of her life, Colonel Gaston Palewski. Tragically, he didn't love her back as much as she loved him.

2) Pamela
Known as "Woman." An accomplished cook, she could recall in smallest detail meals she had eaten fifty years before. Became an expert on chicken breeding.

3) Diana
The acknowledged beauty of the family. Left her first husband in a huge scandal to marry Sir Oswald Mosley, then leader of the British Fascist movement. When war was declared, they were both thrown into prison for years (Diana's baby was only eleven weeks old). After the war, more or less ostracised from public life, they moved to France, where they became friends with the Duke and Duchess of Windsor, also exiles.

4) Tom
The only brother. Killed in the last days of the war (sob).

5) Unity
Gawd. Big, bold and generous, she developed a huge crush on Hitler of all people (!), and pretty much stalked him until they became friends. When war broke out, she went to a park in Berlin and shot herself in the head, but didn't succeed in killing herself. Brain damaged and much altered, she was nursed by the Mitfords' mother until she died a few years later (sob).

6) Jessica
An avowed communist (she scratched hammers and sickles on the nursery windows; Unity scratched swastikas), she eloped with her Spanish Civil War-fighting cousin Esmond at the age of 17. They moved to America after the death of their baby (sob), Esmond joined the Canadian Air Force and was killed in the war (sob). Jessica remarried and became a civil rights activist and very effective muckraker, writing exposes of the funeral industry (The American Way of Death) and prison system (Kind and Usual Punishment), and also a memoir, Hons and Rebels. Often feuded with other members of the family, especially Diana, for obvious reasons. (Jessica regretted that she never took the opportunity of going with Unity to meet Hitler, whipping out a pistol and assassinating him -- she could have done it quite easily.)

7) Deborah
The youngest sister and the only one to be always on speaking/writing terms with all the others. Married the Duke of Devonshire, restored his gigantic ancestral home, Chatsworth, and ran it as a business. Hobnobbed with JFK (his sister married her brother-in-law). Amazingly, she is still alive at 89, the last surviving sister.

What fascinating lives!! Though all of them knew misery and tragedy, the predominant note is one of amusement; sentimentality is sternly banished and all their writing is lively, witty and utterly engaging, the greatest fear that of being a BORE.

They are so English, so repressed, hardly ever saying how they truly feel. The letters are peppered with slang and in-jokes, salted with wicked humour and stabs of glorious bitchiness. And yet, the enduring bonds of sisterhood can't help shining through (how they would all loathe such a sickly sentiment). Oh how I adore them all.

But all the same, I'm quite glad that they aren't my sisters.

PS If the person who stole my two volumes of Nancy's letters from my East St Kilda flat in 1998 is reading this, I would like them back -- no questions asked.
Posted by A latte beckons at 9:27 AM 1 comment:

I remember when school book clubs sold, you know, BOOKS.

Back when I was a kid in New Guinea, the book club was practically the only way to get new books. I'd spend hours agonising over my selection, and then when the parcel of three or four books arrived, exuding that special new-book smell, it was better than Christmas.

But now there seem to be hardly any actual books in the catalogues. It's all kitty pendants, and movie tie-in calendars, and lockable diaries with "free" electronic pens, and puppy posters, and spy kits with voice changers, and mosaic makers. I get that all these add-ons are probably intended to make kids excited about the books. But it seems to me that ultimately what all these bells and whistles do is make the books themselves appear less exciting.

Bah humbug.
Posted by A latte beckons at 11:35 AM No comments:

One of the unexpected joys of having children has been watching my father flower into a superb grandfather.

He was always too busy working to spend much time with my sister and me when we were growing up, though I do have cherished and vivid memories of building Lego, doing jigsaw puzzles, and listening to the Goons together.

But as a grandfather, he has come into his own. Now he has plenty of time. Infinitely patient, he will spend hours stapling and transcribing miniscule picture books with Evie. He explains the principles of flight to Alice and teaches her the controls of light aircraft. He will watch them throw a glider in the garden all afternoon, and retrieve it from the roof when it goes astray. He understands clouds, and coins, and model trains, and gravity, and how clocks work. He can mend broken toys with his special glue. He will help them build houses out of toothpicks. He picks peas, nets the apple tree, digs caverns under the house. If you have a job that's fiddly, or complicated, or painstaking, Papa is your man.

I always knew my mum would be a wonderful grandmother. But Dad has been more of a surprise. He seemed almost shy of my sister and me when we were little.

But now I know he was only practising.
Posted by A latte beckons at 2:03 PM No comments:

Catcher In The Rye wasn't one of my favourite books. Maybe I was too young when I first read it, and too old when I read it again. Maybe I was never a rebel. For whatever reason, it wasn't the novel that pierced my heart and made me gasp, this book is all about ME!

For me, that book was The Millstone by Margaret Drabble. A slim volume about a twenty-something student in 1960s London who finds herself pregnant and decides to have the baby on her own, it may have been an odd choice for a 15 year old Australian girl who'd never even kissed a boy, let alone gone further. But Rosamund Stacey spoke to me in a voice that I recognised as if I'd known it through a hundred lifetimes. Despite all the superficial differences between us, I knew Rosamund; she was me.

Diffident, bookish, always tightly controlled, Rosamund would almost literally rather die than ask others for help or be a nuisance. One of the themes of the novel is how the arrival of her baby, Octavia, splits open the shell of determined solitary independence that has grown up around Rosamund. Babies have needs that cannot be denied; she has to ask for help now, she is forced to rely on other people, to beg for favours, to hand over control, for Octavia's sake.

At the very end of the book, Rosamund is briefly reunited with Octavia's father, another diffident solitary type (almost certainly gay), and recognises that whatever vague yearning she might have felt for him is dim and wavering indeed, compared with the radiant pearly all-consuming love she feels for her daughter. I was a long way off being a mother then, but the truth of that acknowledgement stayed with me. The Millstone told me that ultimately it's impossible to preserve your isolation from the rest of the human race; having a child is the quickest and most devastating way to learn that lesson. But all that didn't mean much to me at 15; I was focused on the way Rosamund was in the world, delighted and a little bit shocked with the recognition.

Rosamund Stacey's story was written just before I was born; I could have been baby Octavia myself. But Rosamund remains my very favourite literary heroine, because she helped me understand myself before I even really knew who I was.

Thank you, Margaret Drabble.
Posted by A latte beckons at 9:34 AM No comments: 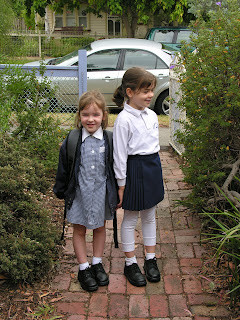 Alice presented herself, fully dressed, in the kitchen at 7.30, then took Evie off to her room to help her get dressed, too. This enthusiasm is unprecedented. I'm pretty sure it won't last. There was a (pedestrian) traffic jam outside our gate as all the parents and kids hurried along the street for the first day of school; I've never seen the schoolyard so crowded.

I didn't shed a tear, I swear; but I do feel a little wistful. Now it's Evie's turn to enter that big wide mysterious world without us; to begin the slow, certain process of leaving us behind.
Posted by A latte beckons at 12:43 PM 2 comments: