Eat the Sky, Drink the Ocean! 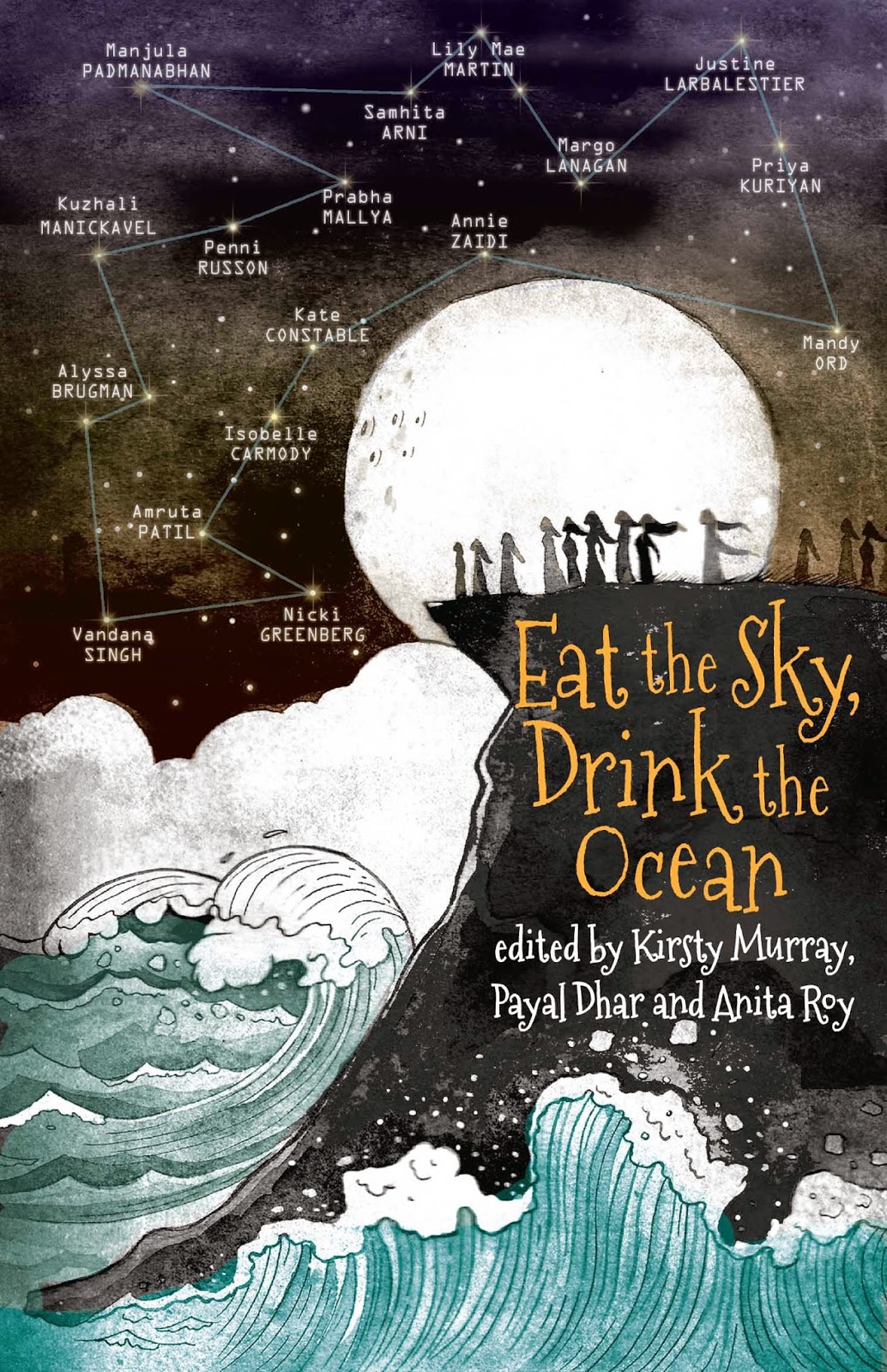 Just look at this gorgeous thing, will you! (This is slightly premature, as it's not out in Australia just yet...)

It is a strange and wonderful object. I can almost guarantee you've never seen anything else like it. It's a collection of speculative fiction (science fiction and fantasy), a glorious bundle of collaborations between Indian and Australian writers and artists. Each of us was paired with an artist or writer from the other continent. Each pair found their own way to work together -- through email or Skype, shooting messages back and forth.

I was lucky enough to be matched up with a wonderful artist called Priya Kuriyan (you can see some of her work here) and as it happens, the cover illustration is taken from an image in the story we created together. (If you click on the link, you will see another beautiful picture from our story, Swallow the Moon.)

The only other time I've worked in collaboration was when Penni and I wrote Dear Swoosie together. (I wrote about this a little while ago.) But I've never worked with an illustrator before. What I found weirdest, but most weirdly satisfying, was that as Priya's illustrations arrived, I was able to cut back on my words -- she was expressing what I'd written so beautifully that my descriptions became simply unnecessary. I think the final word count was about 25% of the original draft!

Another unexpected effect was that my story started out as quite a murky, depressing piece; but Priya's vision transformed it into the most beautiful, uplifting story.

I can't wait until you can all see this unique, extraordinary creation for yourselves. I'll let you know when it's available!

Evie was a little bit offended when she read my last-but-one blog post and saw my reference to 'those damn cat books,' ie Erin Hunter's Warriors series, which is probably singlehandedly responsible for her literacy skills at this point. I suppose Warriors have been to Evie what the Famous Five books were to me - compulsively readable, seemingly endless, slightly despised by smug adults.

So she's set me a challenge today - to write down everything I know about Warriors (without consulting Google!), and she will correct me with her own comments later today.
(Hello! I will be in bold because I said so. Time to see how much Mum got wrong!)
What I Know About Warriors
The Warriors are a collection of warring clans of wild cats, who live in the wilderness in an English-y landscape. One group live in the woods, one by the river, one on the moor etc, and they are named accordingly eg Riverclan, Windclan...um... Treeclan?? (I know that's not right.) (ThunderClan. Not TreeClan.) They fight over territory, but they do share a common mythology based around Skyclan, (StarClan, SkyClan is the fifth clan that were banished.) which is composed of the spirits of dead cats. When you die you join Skyclan, and you stay there as long as some living cat can remember you. After that, I don't know what happens. Maybe you get reincarnated? (Sometimes, yes.) Sometimes Skyclan cats communicate with living cats through dreams.

The individual clans are structured around a strict set of roles. Kittens are called 'kits' and are raised in the nursery by their mothers, the Queens. The Warriors hunt and fight. The young cats are apprenticed to particular warriors who teach them; during their apprenticeship, their names carry the suffix '-paw.' There is a Leader, and also a Medicine cat, who doesn't produce kits but devotes their life to healing (I think they also have the magic dreams.) (That's all true, good job!)

The cats have nature names: Brackenwing, Firestar, Fernwind, (Warriors aren't supposed to have names that contain things related to clan or sacred things) that kind of thing. A cat might start out as Foxkit, become Foxpaw as an apprentice, and finally be given the full name Foxtail.

Firestar was an important cat, maybe the founder of the clans, (He was a house cat who revealed Tigerstar's wanting to be leader and he defeated him. Well, technically Scourge did, but still.) some kind of hero anyway. Brightheart was a cat who was horribly scarred (when I started reading the story of Brightheart, A. refused to let us continue because she was so upset when the other cats were mean to her.) There was a blind kitten called (I think?) Jaykit. (Jayfeather.) Otherwise the fates of individual cats and their complicated inter-relationships escape me. Sometimes the clans are joined by former pet cats, known as 'kittypets.' These cats are distinguished by only having one-part names eg Daisy. (Actually, only some kittypets didn't change their names like Millie and Daisy.)

And I think that's all I know about Warriors!
(Mum, please actually listen to what I tell you, I talk about warriors every time I read it!)
Posted by A latte beckons at 5:47 PM 4 comments: