Comfort Reading
For some people, it's murder mysteries. For others, it's Georgette Heyer Regency romances, or the reliable battiness of P.G. Wodehouse, or escape into high fantasy.

For me, comfort reading means kids' books - the kind of books I devoured when I was a child myself. It doesn't have to be the exact same books. In fact I've been overjoyed to discover some "new" authors lately - new to me, at least - whole new shelves of treasures to savour. What I love most are old-fashioned story-tellers, writers with safe hands, where the writing is so clear and assured that I can forget that I'm reading, and I begin to live inside the story. Strong and complex characters are important, but an evocative setting draws me in, too.

So who have I been turning to? My "new" authors are K.M. Peyton and Cynthia Voigt; I also have a Rumer Godden waiting on the bedside pile. Noel Streatfeild is always reliable.  These are books that need to be read as books - holding the battered paperback in my hands, turning the slightly yellowed pages is part of the comfort experience. Reading these books on an electronic device (can't you just see my nose wrinkling in distaste?) would be like trying to eat macaroni cheese in pellet form. Pointless.

And the other day I wavered outside a secondhand book shop I hadn't visited before (Barwon Booksellers in Geelong). 'You're not here to buy anything,' said my friend sternly.
'I know,' I said. 'But I just have to look. What if they have The River at Green Knowe?'

And you know what, faithful reader? THEY DID!!

What's your comfort reading?
Posted by A latte beckons at 9:09 AM 5 comments:

Today I took a bold step. I threw away my contact lenses.

Since I changed to disposable lenses, I've been prone to saving them up for special occasions. Occasions deemed special enough to be 'contact-worthy' seem to have become rarer and rarer, to the point where I have pretty much stopped wearing them altogether, and finally I thought, what is the point of hanging onto them, while they gather dust in my bathroom? So I chucked them in the bin.

I have written elsewhere about the way that glasses rendered me hideous, and contact lenses restored my self-confidence. But today, perhaps for the first time, I whole-heartedly embraced my identity as a glasses-wearing girl. Pretence is no longer possible.

Though as Michael pointed out (after it was too late), what about swimming?

Oh well, I'll just have to swim blind. And hope that other people will warn me about sharks.
Posted by A latte beckons at 3:12 PM No comments:

Labels: getting rid of stuff, glasses

First Fan Mail for Crow Country
I asked if it would be okay to share this with you. I'm just so chuffed, because it's exactly the response I've been hoping for.

Hi Kate
Just wanted to let you know that I have just finished your book Crow Country and loved it. Being an Aboriginal woman who's family is the Gunai mob in gippsland.  It was great to read how our culture and our stories can be preserved by an amazing writer such as yourself.  To write in collaboration with our people surely this is how reconciliation  should be portrayed.

Crow Country Flies To Bendigo
First there was a musical overture from Jida... 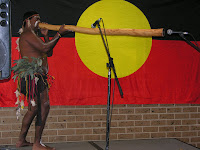 ... followed by a welcome to country by Aunty Di Murray. 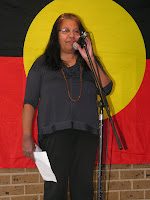 Jida gave us a wonderful performance, including some crow dance and 'waa' calls. 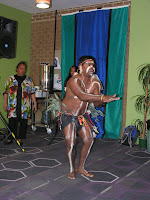 The lovely and supremely efficient Kym Walker, who was responsible for organising the whole day, urged everyone to 'get off your mooms and buy these books!' 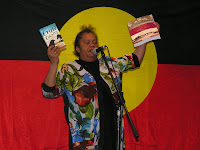 I talked a bit about Crow Country... 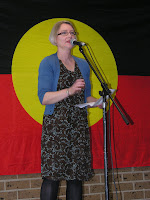 ... then Paul Haw spoke about Footprints Across the Loddon Plains. 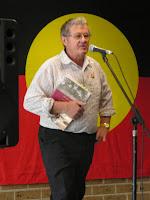 And then we could all relax and enjoy the emu and crocodile sausages! 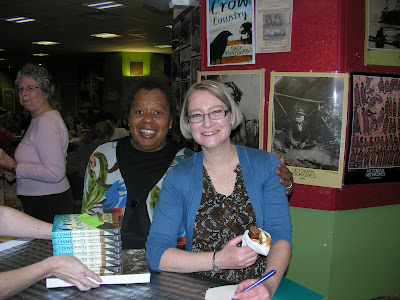 Ten Years Later
When the first plane slammed into the World Trade Centre, I was asleep. Alice was only a few weeks old, and I was in the zombie-like, sleep-deprived state of most new parents. In my case, this was compounded by the fact that Alice and I took a long time to figure out how breast-feeding worked - so she was permanently hungry and cross, and I was permanently stressed and anxious. The only good rest I was guaranteed was the first, deep, dark sleep of early evening, after the nine o'clock feed.

So when it all began, I was well and truly out of it. Michael came rushing into the bedroom to wake me. "Something's happening," he said. Something about a plane -- New York -- the Pentagon -- a skyscraper on fire. It seemed like a dream, I couldn't take it in. Drugged with exhaustion, I blinked at him blearily, rolled over and sank back into sleep.

But when Alice woke for her two am feed, it was still going on. Chilled, I listened to the panic, the terror, the confusion, echoing from the radio. I still didn't understand, but I picked up my baby and held her, there in the darkness. I held her close, too numbed to cry.

I had to leave the room last night, when the memorial shows came on TV. Just like ten years ago, I kissed my precious children, and I went to bed. But I did hear a little from the families of those who died that day. There didn't seem to be any hatred, or panic, or thirst for revenge -- just a terrible, aching sadness for those they lost, and a strong and steely love for those who remain.

Perhaps that will be the ultimate legacy of 9/11. Perhaps one day, the memory of the politics and war-games and acts of violence in the name of God will fade away completely. And we'll be left with a reminder -- because we seem to need so many reminders -- that life is precious, and life is short, and not one of us knows when the end will come, hurtling from an empty sky.
Posted by A latte beckons at 12:14 PM 1 comment:

5th September
2011
Had to think twice to remember how old I am today.
A perfect Melbourne spring day - sun shining, birds singing, flowers blooming. I'm going to sit in the window seat and watch the replay of the Bulldogs' last game for the year, which I missed on Saturday. Barry Hall, Ben Hudson and Callan Ward's last game (sob).
1996
Here I am, 30 years old - not just practically 30, virtually 30, but really, actually 30. And it's weird.
1991
Birthday time again - twenty five today. Feeling a bit homesick and depressed... Had a dream they were giving out prizes at school to all my friends, and I thought I might get the Clarins Prize for dramatically improved skin, but even that was for someone else... Parcel from D, which A hid until today - yay!
1990
Malaysian dinner with C, L, B, A and D... Woken by B banging on the door, he'd locked himself out and been hassled by the police on the way to my place. Refused to give his name and address, they said he'd been loitering, and he said he wasn't, he was walking briskly, and they said, well, you're loitering now... Lay awake for hours talking and brooding and listening to the birds.
1987
Got a soppy card from D. Just as well.
1986
My twentieth birthday!! Woke feeling on top of the world. Much silliness from the boys as waves of "Happy Birthday" ran down the lunch table as they realised... JR gave me a superb book of Australian women's poetry which I spent all day reading except when I went to Contracts.
1985
Home to college for lunch and told that Andrew Peacock had resigned and Howard was the new leader of the Libs. Hawke and Howard both trying not to look gleeful on TV... Over to Pol tute and told everyone what was happening... Got a birthday telegram from Dad... Walked all round uni after dark with PB, sleazing mildly.
1981
So, I'm fifteen. It's all going too fast, I feel as if I'm being left behind... I got a leather handbag, smokehouse almonds, SHOESTRING which I began to read instantly, and The Body In Question, from Nana. Went to the MTC and saw "The Suicide."
1978
Got a yoyo, a dear little leopard that I haven't named yet, from Hilly textas and lots of love, from Daddy a ball, a badminton set, and "Rainbow Valley." As you can imagine, I had a great time. You know, I don't feel any different. Maybe when I'm thirteen... THIRTEEN! (I doubt I'll ever feel any different)
1977
Got a dressing-gown, an encyclopedia, a new dress, Chinese Checkers, hair clips and a T-shirt. I was sick. I went to school at lunch time and I was sick there too. The teacher, Miss Hughes, gets cross. I'm scared about tomorrow.
1976
My birthday! From Mummy - skirt and textas. Daddy - BIG box of Lego. Hilary - a camera. Went for lunch at the Highlander.
Posted by A latte beckons at 11:51 AM 1 comment: