A Room of One's Own (and a minute to one's self)

Oh my God. School holidays. Lord knows I love my children, and they are excellent company; but I am not a sociable person, and my daughters have now reached an age when they count as People. They don't need bums wiped any more, but they do need conversation.

I need my time alone. I am someone who has always largely lived inside my own head, and it's a hard habit to break. Even in crowded share houses, there was always my own bedroom to retreat to, my own door to shut. It's not so easy for a mum to be unavailable. Michael is very good at disappearing to the gym or the shops if he needs some space; for some reason, I find it difficult to just vanish like that. I'm not sure if it's a mother thing, or if it's just me.

I find myself relishing the minutes spent hanging up the washing at the bottom of the garden, or guiltily extending my time in the shower (not that abluting is any guarantee of privacy). Or now, these precious moments snatched in front of the screen while everyone's busy elsewhere. No time to think, no space to write, no time to string a coherent thought together.

And here comes Evie to ask for lunch, and the solitude dissolves almost before it's begun.
Posted by A latte beckons at 11:28 AM No comments:

Things I've Been Doing Instead of Blogging*

** the answer is, sadly, no -- not with wings made from old shirts and balsa wood, anyway

Things I Haven't Been Doing
writing


* with apologies to Poppy from Dear Swoosie, who loves a list
Posted by A latte beckons at 3:49 PM No comments:

Last night, Alice and Evie and Jeremy-from-next-door took themselves off to play the Muddle-headed Wombat. Alice was Wombat, in a battered straw hat and an old green cardigan with a pillow shoved up it. Jeremy was Tabby, "because he's a boy, and he's taller than Wombat." Evie put on my gold-rimmed spectacles and a squeaky voice (no difficulty there) and became the Mouse. "Tabbeee, dear! Oh, you dear old Muddlehead!"

It warms my heart to know that it's not all Bratz and Ben 10 and training bras for pre-schoolers; that it's still possible for children to play Muddleheaded Wombat. Yay.
Posted by A latte beckons at 12:09 PM No comments:

I'm in a flurry of nerves all week. Which is ridiculous. It's only a game of football, after all. And pointless, because there's absolutely nothing I can do to influence the outcome. But the days drag, waiting for Friday -- our last chance at the Grand Final.

Yesterday I go to get my hair cut. My hairdresser asks, "So, do you follow football?" I admit that I do. "Which team?"
"Bulldogs," I say sheepishly.
She pauses, scissors in hand. "Me, too!"
So for the rest of the haircut we earnestly discuss football (does this happen anywhere in the western world apart from Melbourne?) She thinks we need Big Bad Barry Hall; I'm not so sure. She's not impressed by Will Minson; I think he's improved a lot this year. It seems that every Doggies supporter except me had a Nana who lived round the corner from the Western Oval; my husband did, and so does my hairdresser.
We agree that we don't stand much of a chance against St Kilda tonight. They've thumped us twice this year; in fact they've comfortably thumped just about everyone and are hot favourites to win the flag. No one gives the Dogs a prayer tonight. "But there's always that little crumb of hope," groans my hairdresser. She wishes the day would last forever, to keep that hope from fading; I want it to all be over. I can't stand the agony of suspense.

The day passes; the hours count down. I'm busy with copy-editing, and school pick up, and creche pick up, and fish and chip pick up, and dinner with the next-doors. Michael's coming home late, so while the kids watch TV, I turn on the radio and pace up and down the darkened kitchen.

And the Bulldogs come out snarling. They are on fire! They have seven shots at goal and the Saints have nothing on the scoreboard but a measly point! They completely dominate the quarter; the are playing out of their skins.
I pace and I gnaw my nails. The second quarter starts; we're still way in front. My god, we're winning.

Michael comes home and I hastily switch the radio off. He eats dinner, we bundle the girls off to bed. When we switch on the TV, he shouts, "It's 15-1! Dogs in front!" I try to look surprised. The Dogs are in front, and we stay in front. It's a ridiculously low-scoring game, tight-fought and tough. Every possession is contested, nothing comes easy.
Just after half-time the Saints snatch the lead. Painfully the Dogs claw it back. I can't look; I'm playing patience on the living-room floor, muttering, "Come on Doggies, come on Dogs." We're behind, but not by much; it's goal for goal.
With six minutes to go, we're in front. I feel sick. I say to Mikey, "The boys have played so well, they've got nothing to be ashamed of," as if we're losing, not winning.
Then St Kilda kicks a goal to nose in front by a single point. All those fluffed shots in the first quarter have come back to haunt us now. I'm pacing. Come on, boys! They scrabble over the ball; all the players look exhausted. The Dogs have the ball, but it's hard work, inching it up the ground, and there's no result.
Then St Kilda grab possession and just like that, bam, they have another goal. Why don't we ever get easy goals like that? There's only a minute to go. Bob Murphy bombs it long but it's no use. The siren sounds. It's over.
Ryan Griffen covers his face with his hands. Callan Ward collapses to the ground. The Saints are ecstatic; the Dogs are gutted. They go through the motions, patting each other, mouthing congratulations. Later, in the rooms, one player covers his head with a towel. Is he weeping? Griffen blinks away tears. No one moves. They slump, motionless, against the walls. In the end, it was seven points. So close. So close.

I haven't even looked at the papers yet, I don't know what they'll say. The boys played well; they've got nothing to be ashamed of. They came closer than anyone expected.
But close is not the same as winning.
It's over.
Posted by A latte beckons at 6:57 AM No comments: 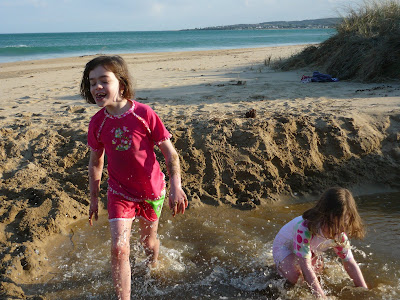 The Sea, The Sea

This weekend I sat with my back to the dunes and watched my little family jumping the waves. My parents and sister were looking down from the holiday unit behind us; we'd all gone away to the beach together to celebrate my sister's birthday. The Lark and the Owl were in heaven, building dams, playing trains, digging in the sand, cooing at baby lambs.

Perhaps it's the sheer vastness of the sea, its impersonal beauty, that gives us a glimpse of eternity. The waves roll in, the waves wash out. But as I sat there, with my birth family sheltered behind me, and my husband and children standing between me and forever, I couldn't help but feel a profound gratitude: that we're all safe, all healthy, all more or less happy, so blessed to have each other and the glory of the sea.

We asked the Owl to rate her holiday out of ten. "Two million, three hundred," was the emphatic reply.

Yeah.
Posted by A latte beckons at 8:57 AM No comments:

Remember what I said about the mock? I TAKE IT ALL BACK.

Well done, Cats. You are a very, very fine football side, and if anyone but the Doggies has to win this year, I hope it's you. Congratulations, Onion ladies. I hope we'll be seeing you (again) in the preliminary final... but I'm not counting on it...
Posted by A latte beckons at 10:22 AM 2 comments:

The perils of using a laptop...

For the last few months, I haven't been using my study much. Mostly because it's a bungalow in the back garden, and it's freaking cold out there. And when I've only got a couple of hours to work before I have to race out and pick up Evie from kinder, it just seems so much easier to settle in on the couch by the heater, or prop up on my bed in the sun with my lappy on my knees, where it's already warm.

But... lately I've had a couple of Whole Days at my disposal (praise be to Michael and ATO flex-time!) and I've started coming out to my study again. And whaddaya know, I've been a heap more productive. I don't think it's just because I've had Whole Days to reflect and ponder, though that certainly helps. It's also the physical fact of sitting at my desk, with my research books spread round me, sitting in an office chair. It says "I am at work. I am serious now. This is Writing Time."

I've never been a writer who could get much done scribbling in a cafe or even in a library. I like silence while I work, and no distractions. I can't even work when the children are home. And now I remember why I prize my room so highly (it's one of the main reasons we bought this house), and why I never want to give it up. Forget hot-desking (is that still happening??) Give me my cold room any day.
Posted by A latte beckons at 9:47 AM 1 comment: