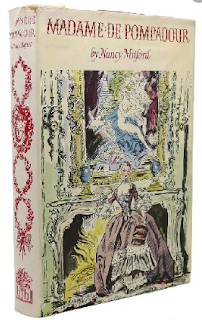 I was very excited to discover a first edition of Nancy Mitford's life of Madame de Pompadour (minus this lovely cover, unfortunately) on the shelves of Footscray Savers recently -- published in 1954, purchased by one Dorothy Cassells, according to the flyleaf, at the Austral Book Shop in Collins St, Melbourne. A little morsel of history.

My knowledge of Madame de Pompadour was confined entirely to the Doctor Who episode, The Girl in the Fireplace, so you can imagine I learned a great deal from this sparkling biography. Despite being a big fan of her novels, I haven't read any of Nancy Mitford's biographies of famous figures from history (the Sun King, Frederick the Great etc). I'm not sure how rigorous Mitford's research might have been by modern standards, though I know she did work hard on these books and she certainly seems very familiar with the people and places she discusses. She has a lovely gossipy tone which makes the book extremely readable, almost as if she were personally acquainted with all the characters involved, and she has no scruples about passing judgement on them, labelling this statesman an incompetent fool, and that lady of the court a silly little miss who should have known better.

From my background of utter ignorance, I can't judge how accurate her analysis might be, but it has certainly given me a sense of the period and the people (though the chapters about wars struggled to hold my interest), and I loved all the little details about hidden staircases, the inside jokes and quarrels and extravagant gifts and building projects, and the insanely complex etiquette of the royal court. And The Girl in the Fireplace does seem to have got some details right -- there were no clockwork assassins, but it really did pour with rain on the day Reinette's body left Versailles for the last time.

Posted by A latte beckons at 10:43 AM No comments:

The Heart of the Family 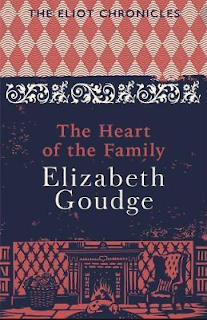 I had to cave and buy the final installment of Elizabeth Goudge's Eliot Family chronicles on the Kindle, though I hope to pick up The Heart of the Family in material form somewhere, somehow, one day. Perhaps even more than the previous two volumes, The Heart of the Family lacks what you might call a plot -- it consists almost entirely of conversations, some in rooms, many in the woods between the two households of the Herb of Grace and Damerosehay. It's almost like reading a book of sermons as various pairs of characters ruminate on pain and sin, death and love, divine grace, guilt and prayer and penance.

The war is over, and Lucilla, the queen of the family, has abdicated her royal seat at Damerosehay to the family of her beloved grandson David. However David is wracked with self-torture at his recent narrowly-avoided infidelity; his newly acquired secretary Sebastian Weber is carrying wounds of his own, having lost his own family in the war, and hating David for his blessings. The eventual reconciliation between these two men forms the core of the story, but there are ancillary family dramas as Lucilla, at 91, meditates on death, other grandchildren fall in love or decide careers, and another baby is on the way.

As Susan Green recently remarked, Elizabeth Goudge is not a sentimental writer. Despite the apparent extreme smallness of her canvas, she doesn't spare her characters torment, cruelty or harrowing self-reproach; but she always offers them some redemption. There are huge themes here, but there is also humour, delight and beauty, and as always a keen and appreciative eye for small children and dogs, which helps to leaven the weight of the deeper reflections. This is probably not my favourite Eliot story, maybe I read it too fast for the philosophy to sink in properly, and I should probably return to it when I need to.

Posted by A latte beckons at 10:38 AM No comments:

The Winds of Heaven 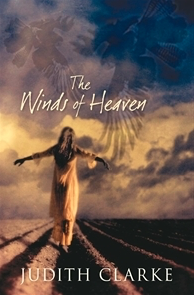 Judith Clarke's The Winds of Heaven was lent to me by my friend Suzanne (thank you, Suzanne!) We have very similar taste in books and I really loved this novel.

Mostly set in the Australia of the 1950s and early 1960s, The Winds of Heaven traces the story of two cousins, Clementine and Fan (Francesca) who are separated by distance but linked by an unbreakable bond. Clementine, bolstered by loving, supportive parents, is a clever girl who powers through school and ends up at university, but Fan is hobbled by poverty and rural isolation, a cruel mother, and difficulty reading and writing, though she is just as clever as Clementine. The two girls' paths diverge, they lose touch, but they never forget each other.

This is a moving, poignant story. For me, it also contained one of those serendipitous moments that really make you wonder if there is a higher power, a reading god if you will, guiding you from one book to the next... Fan is haunted by a poem by Henry Vaughan which begins, They are all gone into the world of light, which is a line of poetry that I've used for years in writing workshops without ever knowing the rest of the poem. And then the very same day I came across the phrase the world of light again in Elizabeth Goudge's The Heart of the Family.

Fan and Clementine's lives are filled with criss-crossing memories, dreams, and images of each other just like this, often in each other's thoughts though seldom physically together. I think I'll be remembering this book for a long time.

Posted by A latte beckons at 1:05 PM No comments: 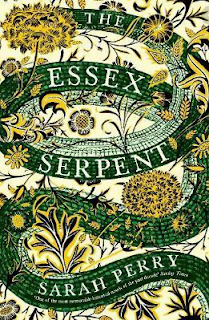 I think The Essex Serpent is the only example of me seeking out and reading a book purely as a result of reading a Twitter rant from the author (Sarah Perry). I stumbled across an impassioned thread by Perry about women and science and the nineteenth century and how critics had scoffed that her novel was implausible... that was enough for me to track down The Essex Serpent (and just check out that gorgeous cover).

Apparently this novel is to be made into a TV adaptation, starring Claire Danes (who, I'm sorry, is too delicate to be forthright, tramping Cora Seaborne, but hey) and that's something to look forward to. Cora is newly widowed, with an eccentric young son, when she relocates to a village in Essex and befriends the family of the local vicar, Will Ransome. The lives of the two households and Cora's London friends (including gifted surgeon Luke Garrett) intertwine and become uneasily influenced by the legend/rumour of the 'Essex serpent,' a Loch Ness monster-style beast which may or may not be lurking off the coast, a long-lost dinosaur or a manifestation of half-formed fears and desires.

The Essex Serpent was certainly an atmospheric, haunting read, and a perfect candidate for TV, with its rich cast of characters and multitude of ideas. I was particularly touched by the portrait of tubercular Stella Ransome, with her collection of blue objects and her otherworldly euphoria. And if the casting of the series doesn't match my own personal imaginings, that just makes it more interesting.

Posted by A latte beckons at 11:03 AM No comments: 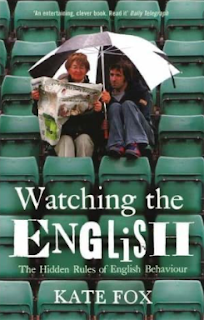 Published in 2004, anthropologist Kate Fox's tongue in cheek book, Watching the English: The Hidden Rules of English Behaviour was an entertaining and enlightening read. My father is English, so I'm not sure if some of these 'rules' were passed to me genetically or through upbringing, but a lot of this book rang very true. I think some of these social rules have been transmitted to Australian society, but other aspects seem to apply specifically to the English (as distinct from the Scots, Welsh etc).

Fox theorises that much of what she terms the English 'social dis-ease' (her central defining characteristic of the English) derives from living on a crowded island. An obsession with privacy, rigid rules of fairness and courtesy (an overuse of please, thank you and sorry; a notorious obsession with queueing), a preference for understatement and modesty, all might plausibly spring from a need to protect oneself from the proximity of others. (Indeed, Fox sees interesting parallels with Japanese society, also a crowded island.)

This is something that probably hasn't travelled to Australia -- with plenty of room to spread out, Australians can afford to be more friendly (not a universal rule, I am well aware, and one mostly applied to 'people like us.') But an emphasis on humour, which Fox sees as a distinctively English way of being in the world, I think has travelled down under -- self mockery, taking the piss, irony, wordplay, all seem just as characteristically Australian as characteristically English.

Some aspects seem more uniquely English, such as a preoccupation with class markers (not defined by money or occupation, but by language, taste and attitudes), and a tendency to 'Eeyorishness' (as indicated by the phrases 'Typical!' and 'Should have known...'). But the typically English social awkwardness and discomfort with expressing emotions publicly, certainly seems to have been passed down through my family. Typical. Should have known.

Posted by A latte beckons at 10:52 AM No comments: