When One Book Leads To Another 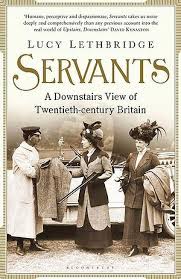 Lucy Lethbridge's Servants was every bit as fascinating and readable as I'd hoped, packed with insight and intriguing historical titbits. I'd always vaguely assumed that the advent of labour-saving technology (vacuum cleaners, washing machines) had made servants redundant, but no, it was the other way round. It wasn't until after the Second World War, when the experience of working independently made most working-class women rebel against the notion of being 'in service' with all its petty humiliations, that the shortage of domestic labour made desperate middle class women turn to the machines.

It was intriguing to discover that as early as the 1890s, there were mutterings about the 'servant problem.' Why were poor girls so reluctant to go into domestic service, where they'd be housed and fed, often in much better conditions than if they stayed at home or in a scungy rented room and worked in a factory? This baffling conundrum led to several undercover reports, with middle class female journalists posing as servants to find out what life was really like below stairs. They seemed astonished to discover how demanding was the sheer physical labour required, not to mention the long hours, the lack of privacy, and the countless reminders of your own supposed inferiority. One maid reported that her employers seemed nonplussed and oddly unsettled at the idea of her reading serious books, rather than trashy romances or lowbrow magazines. 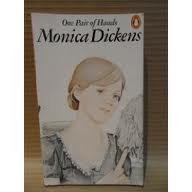 One of the sources for Servants was Monica Dickens' One Pair of Hands (1939), which I looked up on the Kindle and was delighted to be able to purchase instantly. I vaguely remembered reading Dickens' One Pair of Feet at high school, which dealt with her time in nursing, but I'd never read the first volume. It's a hoot. Monica Dickens (grand-daughter of Charles) was an unconventional school girl and was expelled (apparently) for throwing her uniform off a bridge. Instead of following the normal upper-class career path of debutant, wedding, unhappy housewife, she decided to work as a cook-general, thereby "giving many of her employers the rather uncomfortable experience of employing someone who was further up the social scale than they were" as her biography puts it. One Pair of Hands is her account of her experiences, good and bad.

Of course, it's a very different experience working in service when you don't really have to, and Dickens several times simply runs away from situations that have become awkward or unpleasant, but her memoir is so lively and funny, and Dickens herself seems so irrepressible, that you can't help wishing that you were friends with her. She is cheerfully self-deprecating about her disasters and inadequacies as a cook and cleaner, and unashamedly fascinated by the personal lives of her employers, never letting on that when they speak French or German to keep secrets from her, she can speak far more fluently than they can...

I'm enjoying One Pair of Hands so much I might have to revisit One Pair of Feet as well, and I don't think I've ever read My Turn To Make The Tea, which is Monica Does Journalism... Oh, dear, this is where instant gratification can lead you...
Posted by A latte beckons at 1:02 PM No comments:

This week I did something that I only do very rarely -- I gave up on a book.

I'd asked Alice to choose which book from the tottering pile beside my bed I should read next, and she chose the volume at the very bottom of the pile, which already tells you I wasn't exactly ganting to read it. This was a book by a very well known and prolific American author (who is also a favourite of a good friend, though I haven't actually read any of her books before).

Perhaps the way I acquired it had an influence as well. I picked it up at the library book sale as part of a friendly exchange with a stranger. This woman had picked up a Carol Shields book and exclaimed over it, and I pointed out another Carol Shields she hadn't noticed and said how much I loved her books. So then she recommended The Abandoned Book to me, and I didn't feel as if I had any choice but to take it home with me, even though it didn't instantly appeal.

And sure enough, about eighty pages in, I was struggling badly. I can't put my finger on what exactly wasn't working for me. The writing was fine, but I just wasn't interested. And it was really long, too. Perhaps if I hadn't had another fifteen books on my pile, all of which I was more keen to read than this one, I might have persisted.

Oh, well. It was worth a mis-spent dollar to have a friendly chat with a stranger over rows of pre-owned books; a reminder that book-lovers are everywhere.
Posted by A latte beckons at 9:49 AM 1 comment:

(this means you, Mum and Dad)

There are a couple of really nice reviews of New Guinea Moon at Readplus and What's Rebecca Reading?.
Posted by A latte beckons at 12:06 PM No comments: 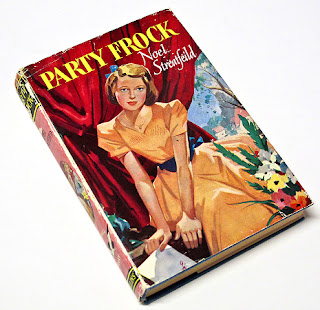 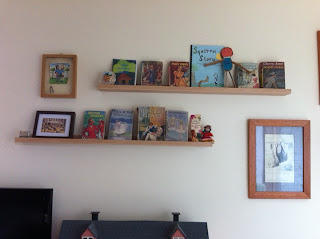