The Little Book of Hope 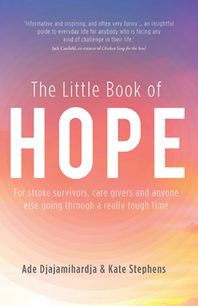 Mum asked me to buy this for her after hearing Ade Djajamihardja and Kate Stephens speaking on the radio a few weeks ago. Ade had a devastating stroke several years ago, which left him partially paralysed and facing multiple challenges to regain good health. He tells his own story here, with some sections written by his partner and primary caregiver, Kate.

Not surprisingly Mum and I are always on the lookout for 'stroke stories', especially those with a relatively happy outcome, and Ade and Kate's story is told with good humour and a focus on the positive, without sugar-coating the very real difficulties and pain the couple have endured. Lots of the advice here could apply to ordinary life, not just life after a stroke: change what you can to improve your environment; staying positive is good for the well-being of the people around you as well as yourself; set yourself tiny goals.

There are disappointing stories here too, like the time Ade was invited to an industry conference, planned meticulously so he could attend, and was so excited to be dipping his toe back into his former life. He and Kate arrived at the venue, only to find that at the last minute the conference room had been switched upstairs, which meant that Ade in his wheelchair could no longer be part of the event.

But overall, Ade and Kate's story is an encouraging one, with a focus on making the most of every day, which is a lesson we could all afford to learn, stroke or no stroke.

Posted by A latte beckons at 2:37 PM No comments: 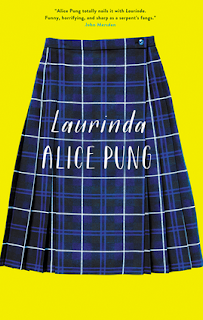 First time around, I read Laurinda in a single day. This time, it's taken me more than ten days. And I still haven't managed to sort out my feelings about this novel. The queens of the Cabinet are so awful, yet so powerful -- I don't understand how the principal gives her tacit approval to their actions, yet still seems to believe in Lucy. There's a lot going on in this book and I can't shake the impression that Pung herself hasn't fully worked through her own attitudes about privilege, origins and power. But then, who has? So much of this novel is powerfully written, simultaneously punchy, yet delicate and authentic -- but I can't quite seem to shake it down into a coherent whole.

I'm looking forward to discussing Laurinda with the Convent book group. Those smart ladies will help me work out what I think!
Posted by A latte beckons at 2:20 PM No comments: 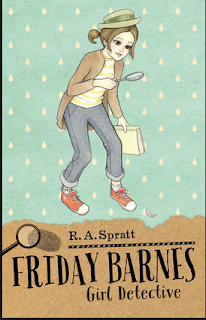 Posted by A latte beckons at 11:35 AM No comments: 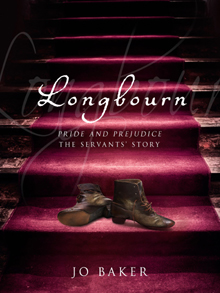 Longbourn by Jo Baker is an unmitigated delight. Sharply detailed, beautifully written, it tells the story of Jane Austen's Pride and Prejudice from a different angle -- this is the story of the servants of the Bennets' house, Longbourn.

I'm normally leery of Jane Austen sequels and re-tellings, but this 2012 novel is actually neither. It butts gently against the events of P&P and occasionally overlaps them, but it's really dealing with all the things that Jane Austen left out. Things like the hard, unforgiving labour of the underclasses; like war, and slavery, and grime, and sex, all the untold stories. But Baker still clearly admires and loves Austen's work, and is respectful to the origin novel, even while giving us a very different, clear-eyed view of our favourite heroine and difficult hero, a view which is not always favourable.

But the centre of this story is emphatically not Lizzy and Darcy; it is the relationship between Sarah, the housemaid, and the footman, James. Their love does not run smoothly, any more than Elizabeth's and Darcy's did, and they have their own share of misunderstandings and reversals. But their pains and trials have much more serious potential consequences than Lizzy's genteel poverty or social humiliation. James and Sarah might face flogging, starvation, the poorhouse, death in a ditch. Baker has done her research, but the novel wears it lightly, and the writing is subtle and completely engaging. The comparison is obvious, but this is so much better than Downton Abbey!

Apparently it's going to be a movie. For once, I can't wait.
Posted by A latte beckons at 12:33 PM No comments:

Abandoned! The Man Who Loved Children 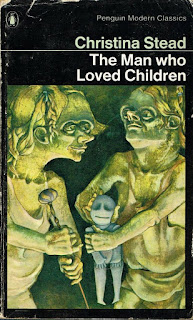 I read this classic novel (it even says Modern Classic on the cover!) years ago, and when I spied it on the shelves at my parents' house, I thought, I should really read that again. I remember being spooked by the cover art and thinking it might be a horror story, which in a way it is.

Published in 1940, this tale of a deeply dysfunctional family has the ring of autobiography about it. Henny and Sam are the warring parents, locked in a miserable marriage, whose relationship is played out through the allegiances of their brood of children, including gifted, clumsy, ugly duckling Louisa.

I skipped the introduction this time around, slightly daunted by the smallness of the print and the number of pages I was signing up for. And as I read the first hundred or so pages, I was struck by the brilliance and clarity of the writing, the portrait of the intimate cruelty inside an 'ordinary' family. It's great, powerful, difficult stuff.

But when I got to the part (spoiler) where Louie drowns the cat in the bath, I thought, how badly do I really want to spend time with these unhappy people? I get it, I thought, I remember this; they're all horrible, Louie has to escape to survive, Sam is a genial monster, Henny is a troubled shrew.

There are so many other books I'm dying to read. Do I really need to slog through this one again? And I thought, no.

Posted by A latte beckons at 9:34 AM No comments: 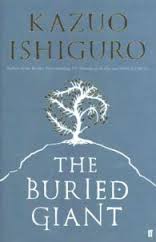 I just wasted about fifteen minutes fruitlessly searching for an image of the cover of the edition of The Buried Giant that I borrowed from the library, but for some reason there doesn't seem to be a copy of it anywhere -- not even on the library catalogue! It happens to be a large print edition, which caught my eye as I walked through the library on another mission, and as there wasn't a normal edition on the shelves, I took this one. (And I have to admit, the large print was easy on my eyes -- not that I need it, no no no...)

So. In the past I have found Kazuo Ishiguro to be quite a frustrating author. I adored The Remains of the Day, absolutely loathed When We Were Orphans, and I'm intrigued by Never Let Me Go (which I've ordered but not read yet). I didn't quite know what to make of The Buried Giant.

I knew it was going to be a strange book, an allegory set in ancient Britain, where a fog has descended over the landscape, robbing the inhabitants of their memories. An elderly couple, Beatrice and Axl, set out to join their son in what they vaguely believe to be a nearby village, though disquiet lurks around the circumstances in which he left them. There are encounters with a Saxon warrior, a wounded boy, a dragon, an elderly knight, who is a relic of Arthur's Round Table, and a mysterious boatman who conveys people on their final journey. But it transpires that personal memories are not the only ones that have been stolen by the fog; a general amnesia about the terrible war between Britons and Saxons has also settled on the land -- a blessing or a curse?

As I was reading, I kept feeling that I was missing the point somehow, as if the story itself was obscured by the mists, and perhaps this was the point of the novel? But it made for a vaguely annoying read. The theme of memory and forgetting is of course a pertinent one -- just two nights ago on the radio I heard Dr Bill Lott discussing genetic memory, and whether it's useful to cling to the memory of historic wrongs -- will we still be memorialising Gallipoli in a thousand years time? On the other hand, some things are forgotten which need to be remembered more clearly (Aboriginal dispossession is the obvious example). This is an important topic. (And an interesting example of the serendipity that often accompanies one's reading -- relevant things do just pop up.)

But The Buried Giant only made this clear right at the end of the novel, too late for proper exploration of the implications. I know that Ishiguro often explores these themes, and perhaps I should have been better prepared.

I'm not sorry that I read it, and it did pique my interest enough to spur me to hunt down Never Let Me Go, but I can't shake off a faint disappointment with The Buried Giant.
Posted by A latte beckons at 10:19 AM No comments: