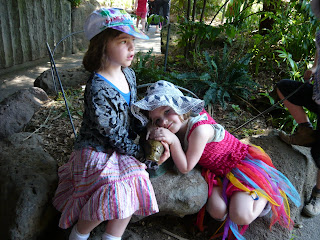 Wrapping Up The Year

The pattering of gumnuts on the roof sounds like hail. I only wish it was...

We're getting ready to set off on the holiday round - Christmas Eve with Michael's family, Christmas Day with my parents and sister, friends for New Year, a week at the beach. It's been a busy, mostly happy year.

I knew I wouldn't get much writing done in 2009, because it was Evie's kinder year and the days are so chopped about; but I surprised myself. Penni and I dashed off Dear Swoosie together (it's due out on 4th January, folks!). I've written about 20,000 words of my New Guinea book (though I think I'll end up discarding nearly all of them). And Pen and I have grand plans for a super-duper fantasy collaboration next year which we're both hugely excited about. Crow Country won't be ready for next year, but we're all hoping it will be published in 2011. It's nice to have that up my sleeve!

Winter of Grace was published at the start of the year, and picked up the Children's Peace Literature Award. Cicada Summer came out in May, and has been shortlisted for an Aurealis Award -- both tremendous and unexpected honours.

Evie had a busy, happy, social year at kindergarten, and is jumping up and down at the prospect of school in 2010. A big contrast to her elder sister, who still hates school -- but maybe not quite as much as she did a year ago. Huge thanks to Trish, her literacy intervention teacher, who has worked wonders this year. Reading is never going to be easy for Al, but it is getting easier, and most importantly, she's now willing to try.

Some awful things happened this year -- the Black Saturday fires, the death of Michael's father -- and the world seems to be sliding, slowly but inexorably toward destruction... But hey, the Bulldogs nearly made the Grand Final! My beautiful girls and my lovely husband are all safe and well, and more or less happy, and we have a lot to be thankful for.

Happy Christmas y'all, and stay safe over the holidays.
Posted by A latte beckons at 10:31 AM