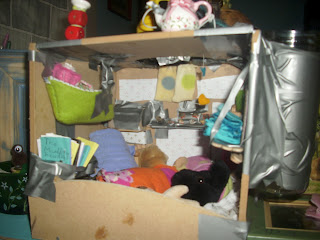 I just have to keep reminding myself that the flour on the floor, the newspapers all over the table, rag box spilling in the corner -- in short, the general chaos of our living space -- really is worthwhile. Who knows, maybe that's the thing I'll miss the most when they're all grown up.
Posted by A latte beckons at 9:32 AM