Bluffers' Guide To The Bulldogs Part 4 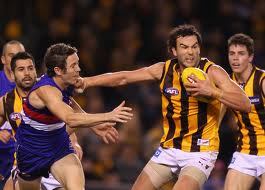 Another week, another defeat to the Western Bulldogs.

It's becoming a painful pattern this season. Earlier in the year we had a couple of gallant losses, near misses, and even some wins. But things are looking pretty dark and dismal down at the Kennel at the moment.

As a relatively new supporter, I've been spoiled the last few years. We've made the finals most years, we made three preliminary finals! Coming third or fourth was excitement enough for me (though not for many of the long-suffering Bulldog fans who have been waiting sixty years for another flag). Even when we lost, we usually looked like we were in it, and there was always hope that we'd come good next week.

Well, not now. We look bloody horrible. We are "rebuilding". We are "getting games into the kids". We don't need to tank for draft picks - we're just losing without even trying. We're at the bottom of the football cycle. It's no fun watching the Bulldogs at the moment. We look slow, clueless, unskilled and disorganised. I'm sure there is a long term plan for the team's development, but it's ugly to watch.

This is where, as a supporter, you have to make a hard decision. Do I jump off the bandwagon while it's struggling through the mire? Have I got better things to do with my time and money than sit through yet another flogging? Do I really want to put myself through that pain? I hate seeing my boys lose, knowing that whatever misery I'm feeling is amplified a hundred-fold for them. Being a football fan when your team is doing badly is the opposite of enjoyable.

It's tempting to walk away. To say, see you in five years -- when we've acquired some talented youngsters, when the coach's plan has gelled, when the kids we're blooding now have matured into senior players and gained some strength and confidence and experience.

The trouble is, with a club like the Bulldogs, in five years time there might not be a team to come back to.

Our membership is low. We are poor. A few years at the bottom of the ladder could kill us. If enough members walk away, we might not make it. We will drown.

So I've made my decision. I'll try to anaesthetise myself against the pain, but I'll hang in there. Because being a true supporter means loving your team even when they're awful. And when victory finally comes, it will be all the sweeter, and I can feel as if I've earned it too.