Another Medal for Crow Country 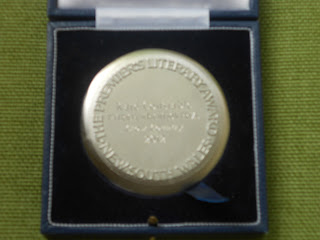 On Friday, my good mate Penni and I flew up to Sydney for the NSW Premier's Literary and History Awards. We were looking forward to a fancy dinner and a night away in a nice hotel, but we also couldn't help feeling quite sick with nerves. The Awards organisers had made the decision not to notify winners in advance - which meant that most of the short-listed authors and historians were there on the night, but it also made for a lot of tension in the room!

Well, as you can see from the picture above, it was a good outcome for Crow Country, which won the Patricia Wrightson Prize for Children's Literature, and also for Penni's Only Ever Always, which won the Ethel Turner Prize for Young Adults. Being able to celebrate with one of my best friends made the night incredibly special; needless to say, we both found it quite hard to sleep that night, and the next morning we were wandering around still in a daze (and occasionally pinching each other).

This is what the judges said about Crow Country:


It seems that war friends form lifetime bonds, except when class and/or race enter the equation.  Such is the basis for this compelling story set in a small Australian country town.  Manslaughter, cultural secrets and unrequited love give rise to the tensions and ill-feelings that linger into the second generation. When Sadie unwillingly moves with her mother to the little town of Boort, the thirteen-year-old finds herself in conversation with a crow who embroils her in a mystery from her family’s past. When she time-slips into the body of her namesake of two generations ago she is caught up in a class-race conflict. Constable has cleverly let Sadie participate in her past history without changing it, which allows her to be the keeper of an enormous and troubling secret in her own time. Constable’s characters are beautifully rounded and real, from the family in the past to old Auntie Lily, an Aboriginal elder.

This is a multi-layered story, beautifully told, with themes interwoven through three generations; the prejudices and mores of the 1970s persist into the twenty-first century with black-white friendships frowned upon in both parents and children. The Indigenous connection to the land is a major theme, with a sacred circle of stones being exposed when drought causes the dam water to recede and the old town to be revealed. As in life, sport becomes the common bond as truths win out and secrets are fought for and kept. At the start of each chapter a small black crow sits on the black number while the cover illustration signals the stark ravages of drought with a large crow demanding attention as it does throughout the book.