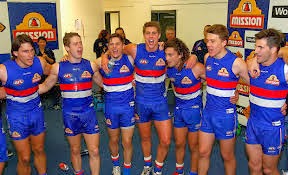 It's been a long time since I posted anything about the Western Bulldogs; frankly, it was too depressing. We finished fifteenth out of eighteen teams last year. That's not very good, even I have to admit that.

BUT... there are some grounds for cautious optimism. I don't think we'll play finals this year, but I have reason to believe we'll be better than we have been for the last few seasons. Here's why:

1) The hoops are back
See the jumper in the picture above? Them's the hoops. Goodbye Robodog, welcome back to a sensible, proper, stylish football jumper. Anyone would play better in a great jumper like that. (The hoops actually came back last year, it's just taken a little while to start working...)

2) Footscray Football Club is back
This year, the Bulldogs have their very own VFL team. This means that our young players can play the positions we want them to play, not what might suit our affiliate club, who are only interested in winning the VFL finals, not the long-term development of OUR club. Also, FFC will play some games at the Whitten Oval. This is a victory for nostalgic fans who miss the old ground, our spiritual home. Can't wait.

3) We finished well last year
Yes, I know we ended up fifteenth, but it's also true that we won five games in the second half of the year, and had closer-than-expected finishes to a few more. Things seemed to be on the up; even in the games we lost, we were a lot more competitive.

4) How good do those kids look?
Libba is already elite, and should have been All Australian last year. Wallis is coming good. Jordan Roughead has quickly become a stalwart down back. But also keep an eye on Macrae (silky skills, and grew an extra 3cm over the summer!), Stringer (a beast!), Hunter (sooo smart), Hrovat (pronounced ROVE-at), Talia (maturing in the backline).
The most satisfying part of watching the kids is that quite a few of them are father-sons (Libba, Wallis, Hunter) which means we got them for a steal. Bonus: Talia is a grandfather-grandson! His grandpa played in the 1954 premiership!
Prediction: Tom and Tony Liberatore will be the first father-son Brownlow medallists. Yes, Libba jr is really that good.

It's still a development year, but hopefully, hopefully, we will start to see some signs that it's all coming together. Believe in Macca. He's got a plan. 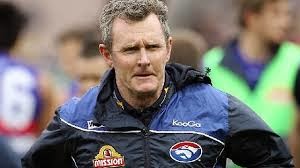