The Book I Wish I'd Written 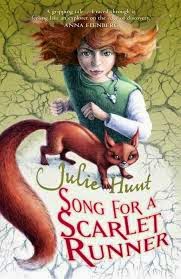 Several years ago, I started to think about a book I wanted to write. I wanted to set it in the marshes, that misty halfway territory, half-land, half-water; at the edges of things, with stretches of beach and sky, and mud and water. I wanted to write about loneliness and courage, stories and spells. I was going to include a blind person, and a dog, and a girl who doesn't know how brave she is… It was going to be eerie, and magical, silvery with moonlight and dreams, with ghosts and half-forgotten songs.

Well, in the writing, my book, as books often do, has turned into something quite different from that original conception.

But Julie Hunt has written the book that I was dreaming of, all those years ago, and she's done it so much better than I ever could have. Song For A Scarlet Runner has been short-listed for every award there is, and deservedly so. This is a wonderful, rich and rewarding children's fantasy.
Posted by A latte beckons at 10:29 AM