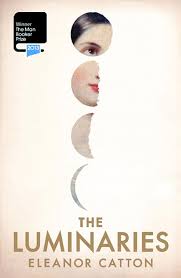 I'm powering ahead with The Luminaries, which has surprised me, because I was so intimidated before I started reading it. It's just so HUGE. You could do a burglar a serious injury if you heaved this book at him.

I've just realised (lucky the book is so long, or I would have missed it altogether) that the twelve main characters represent the twelve signs of the zodiac. I don't know how I could have overlooked this, as it was discussed in the reviews I read, and also clearly mapped out in the star charts provided at the start of each section, but ANYWAY… now that I've twigged, it's added an extra layer of enjoyment to my reading.

I used to be a bit of an astrology nut -- it was one of those things that I liked to pretend that I believed in, like the tarots… and maybe, deep down, I'm not really sure whether I believe in it or not… I know, logically, it must be nonsense, but it's fun nonsense, and it can be surprisingly illuminating. I dabbled in it just enough to be able to appreciate details like the Libra character wearing his cravat in the latest style, and the Virgo man being so meticulous and adhering to his own peculiar code of honour. So now I'm keenly looking for little clues like this, and chuckling, and feeling superior. Which is the best thing about astrology, isn't it?
Posted by A latte beckons at 10:28 AM