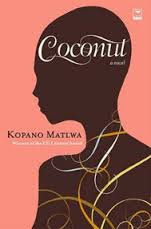 I sought out Coconut by Kopano Matlwa from a list of YA books from non-Anglo countries that was published in The Guardian a while ago, and was surprised to see it pop up at Brotherhood Books. It's a South African edition, too, the third reprint in two years, so it must have done pretty well. It won the European Union Literary award, which I must admit I had never heard of, and is, strangely, a prize for first-time South African novelists.

This was an intriguing glimpse into a world that I know little about. I hardly ever read African books, let alone African YA, and this was a voice I had never heard before, and a lively, energetic and perceptive voice at that. Matlwa is obviously a young writer, and this novel has some of the faults that most young writers fall into -- there are clear autobiographical elements (not necessarily a fault, but sometimes clumsy), and there is a focus on character to the absolute exclusion (in this case) of plot.

The book is narrated in two voices, in two distinct, but overlapping halves: Ofilwe is the daughter of a nouveau-riche black family who live in a gated, mostly white community. Ofilwe longs to reconnect with the traditional culture the family has abandoned in a desperate attempt to fit in with white society. Fikile is a waitress at their regular coffee shop, outside their world but determined to claw her way in by any means possible. Fiks is a poignant figure, at first seeming confident and strong, but secretly very vulnerable. Each girl sits on either side of a racial divide that seems to make them both equally unhappy.

This novel is a window into a country which has undergone tremendous upheaval in recent years, and where racial lines are supposed to be blurring, but where the burden is history is too heavy to be easily thrown off. Not a book I would normally have picked up, but that was kind of the point of the exercise.
Posted by A latte beckons at 11:32 AM