Sidney Chambers and the Shadow of Death 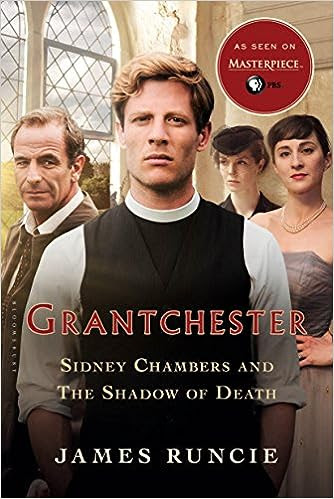 Another impulse buy - I was watching Grantchester on a Friday night with a couple of glasses of champy under my belt, and I had the Kindle to hand, so I looked up the first book in the series (I didn't realise Grantchester was based on a series of novels by James Runcie until I read a review in the Green Guide...) Anyway, I found it, and it was only a couple of dollars, so I clicked BUY.

This was a peculiar reading experience. Usually I read the novel first and then feel critical of the televisual or filmic adaptation. This time it was the other way around. James Runcie has a background as a screenwriter, and - how can I put this politely - it shows. Grantchester (otherwise known as Sidney Chambers and the Shadow of Death) works much better as a TV show than it does as a book. For a start, there's the title -- going for a Harry Potter vibe, maybe? Sidney Chambers is an appealing enough character, in the grand tradition of clerical detectives (I remember reading quite a bit of Father Brown and Don Camillo at school) and the 1950s setting is attractive, too -- Miss Marple territory, social upheaval and lovely frocks. The plots are neat enough, and there are six short stories in each volume, which makes for easy reading.

But some of the dialogue is terribly clunky and Runcie seems to have taken to heart the primary school injunction to avoid the word 'said' -- his characters are forever replying, answering, asking, beginning, enquiring, continuing... I couldn't help feeling that one more editorial sweep might have cleaned up Runcie's awkwardness and made this a smoother reading experience.

Having said this, by the time I got to the end of the book, I was enjoying it... Perhaps not quite enough to go back for volume 2. But it makes good television, and I've got hooked on Grantchester season 2. Maybe they should skip the books and just go straight to the script-writing stage? Hm. Jury is out.
Posted by A latte beckons at 2:59 PM