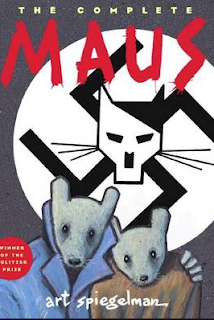 Art Spielgelman's classic graphic account of his family's survival under the Nazis, Maus, was first published in 1973. To my shame, I had never read it, until now.

In Maus, and the sequel Maus II, Spiegelman retells his father's account of life in Poland under Nazi occupation during the Second World War. The Jews are drawn as mice, the Nazis are cats, the non-Jewish Poles are pigs. Each panel crackles with energy, as if Spiegelman were scribbling it at top speed, and the story is filled with both tragedy and unexpected humour. Vladek is resourceful, courageous, quick-thinking, determined to survive against horrendous odds. But as he recounts his history to his son, in current-day America, he is also infuriating, comically miserly, irascible, impossible to live with. He is a hero, but not a straightforwardly admirable man.

I raced through this book, gobbling it so fast that I barely took in the artwork, focused on the dialogue and the words that propel the story forward. We know (because this is a true story) that Vladek and Anja will live. But plenty of others we encounter along the way will not survive. It's easier to digest the horrors of the Holocaust when it's presented in the form of cats and mice playing out the drama, and it's a story that is so brutal, so hard to comprehend, that perhaps we need a little help to face it.

During Maus II, Spiegelman himself reflects on the difficulty of his task. How can he draw Auschwitz? Can he find a way to depict a tin workshop without drawing machinery? Can he do justice to his father's story, and overcome his own feelings of guilt and anger toward Vladek? Does the world even need another Holocaust story?

If that story is Maus, then the answer is, yes, it does.
Posted by A latte beckons at 2:46 PM