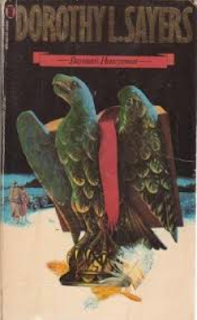 A detective story with romantic interruptions, or a romance with detective interludes? Busman's Honeymoon is the final volume of the adventures of Lord Peter Wimsey and Harriet Vane, and sees the couple married at last. The usual rule is that URST should never be resolved, but I think this novel provides a satisfying conclusion to Peter and Harriet's difficult courtship, because it shows that married bliss may not necessarily be smooth sailing and happy ever after.

Lord Peter has come a long way from the original 'silly ass' dilettante of Whose Body? In fact, the heart of Busman's Honeymoon, despite its comic episodes and farcical interludes, concerns the psychological impact of Wimsey's 'meddling' and its very real consequences -- in this case, the murderer will hang. We know that Lord Peter was damaged by the War; now we learn how heavily the responsibility of life and death weighs upon him. It's almost more than he can bear... until Harriet gently reminds him that if not for his 'interference', she would have lost her own life.

The penultimate section, where Harriet tours the ancestral seat, including an encounter with the family ghost, tips into twee wish-fulfilment territory. But the real power and agony of the final vigil makes up for it.