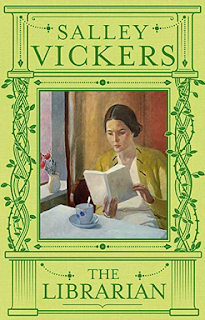 Despite its delightfully old-fashioned cover, The Librarian, by English author Salley Vickers, is a new release. It was lent to me by my friend Suzanne, who guessed correctly that its setting in rural Wiltshire in 1958, and its heroine, a young children's librarian, would appeal to me!

This is a perfect summer holiday read. 24 year old Sylvia Blackwell has taken a post in a small country town, where she battles with the smarmy head librarian, gradually befriends her neighbours, and falls in love. She also butts up against the small-minded conservatism of post-war England.

Rural Wiltshire is a place familiar to me, because my father's family come from there; in fact, Dad might have shared a London-Swindon train with Sylvia, just before he emigrated to Australia. And to add to the parallels, the novel ends with a coda in Melbourne, where two of the child characters meet up many years later and we discover what became of the rest of the cast.

Principally, The Librarian celebrates the love of books, and especially children's books. 1958 was the year that one of my all-time favourite books, Tom's Midnight Garden, was published, and it duly receives a mention here, along with several other classics. Vickers also name-drops some authors I'm not familiar with, like Sylvia Townsend Warner, whom I will need to check out.

Perfect for reading under the fan with a cool glass of elderflower cordial. Cheers!