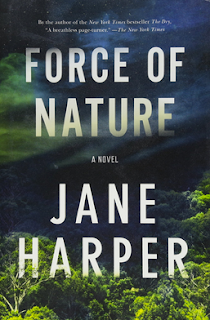 So much did I enjoy The Dry that I plunged straight into Jane Harper's second Aaron Falk novel, Force of Nature. This time the setting is not the bone-dry, parched paddocks of rural Victoria, but the soggy, impenetrable slopes of the (imagined) Giralong ranges national park, once the haunt of a notorious serial killer -- shades of Ivan Milat in the Belanglo State Forest.

The atmosphere is claustrophobic as Harper again employs parallel narratives to trace the events of a three day corporate bonding hike which quickly unravels, and the subsequent search for a missing hiker, which is entwined with Falk's investigation into corporate wrongdoing. Harper avoids the trap of spending too much time outlining the details of the firm's corruption -- they're just bad, and that's all we need to know. Instead Harper focuses on the interpersonal relationships between the five women on the hike, and their family backgrounds.

This was another absorbing, satisfying story. I'd heard that it was supposed to be less good than The Dry but I disagree; I found it just as engaging. Jane Harper is one of those writers where you can relax into the story, knowing that you are in safe hands; that's one of my highest accolades! I've bought the third book, The Lost Man, for my mother's birthday -- I can't wait till she's done.