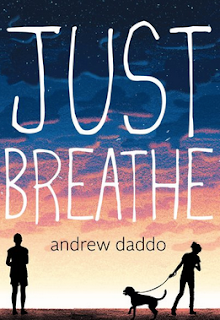 This month's theme for the Convent book group is Celebrity Authors, and I will put my hand up and admit that I came prepared to sneer. As a professional non-celebrity children's author, I have always enjoyed growling when someone like Madonna or Ricky Gervais gets a publishing contract on the strength of their name. Okay, maybe Ricky Gervais can write, he has written other things, after all, but there are a LOT of film stars who seem to think, hm, children's book... not many words... how hard can it be?

So it is with some chagrin that I am forced to admit that Andrew Daddo's Just Breathe is really good. (This is his 26th book, so I guess he is more of a writer than an actor by now.) Hendrix is a runner, with every aspect of his training, his food, even his breathing, regulated by his controlling father. Emily has moved from Benalla to be closer to her doctor... yes, it's not good, Emily has a time-bomb in her head. I'm not giving anything away to reveal that Emily and Hendrix fall in love. The obstacles to their togetherness all come from outside -- Hendrix's ambitious dad, and Emily's illness.

I became hugely invested in the young lovers. Maybe I felt Emily's situation all the more keenly because of my friend Sandra's recent swift death from a brain tumour, I don't know. Daddo writes really well, though the occasional teen term seemed slightly off to me, maybe his kids speak a different dialect from mine! (My kids would never say 'gatho', except ironically.)

But one thing which continually pulled me out of the story and actually made me really angry was the number of typos and outright spelling mistakes in this edition. For example: eek for eke (twice!), Sherin for Sherrin, antioxidents for antioxidants, misplaced apostrophes, taught for taut... and sadly, many more. Aaargh! I am told that a high level of these mistakes tends to de-bar a book from award consideration. If that happens to Just Breathe, it would be a real shame.