Staring At The Sun 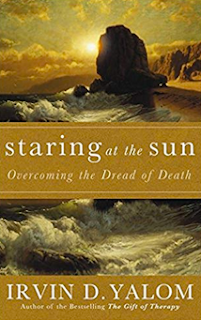 Irvin D Yalom, psychotherapist and author, wrote Staring At The Sun: Overcoming the Dread of Death when he was only 72! Now he is 88 and still meditating on the same human, existential dilemma -- the reality that death will come to us all.

Staring At The Sun was lent to me by my friend Chris, one of whose jobs is in pastoral care. I found it both confronting and comforting. Yalom is unflinching in facing 'the dread of death' (or 'the terror of death' as it's subtitled in the US), and traces many of the seemingly minor crises of therapy back to the ultimate fear, the fear of ceasing to exist. Yalom is an atheist, and while he doesn't try to talk people out of their personal religious consolations, he doesn't believe in any kind of afterlife. He is quite certain that death is a state of non-consciousness, exactly the same as before our birth.

As usual, the greatest strength of Yalom's writing lies in his case studies, accounts of his clients and their struggles, and his own role in teasing out their fears and assumptions. He readily and refreshingly admits his own mistakes, his own biases and fears; to Yalom, we are all humans travelling the same road together.

As for myself, I think an experience I had a few years ago has done a lot to soften my own dread of death. It was when I went under general anaesthetic for abdominal surgery; I was terrified that I might gag or vomit and die under the anaesthetic, and as I went under I was earnestly explaining my panic to the anaesthetist. Just as I was losing consciousness, I was aware of a sense of liberating surrender. If the worst happens, I thought, I can't do anything about it now. If I do choke and die, I won't know anything about it. This was an immensely comforting thought. So I slipped easily into the dark, and woke up hours later, when it was all over.

Of course I don't know what my own death will be like, and if there is a 'waking up' afterwards, I'll be extremely surprised. But I hope it's something like that experience of losing consciousness under the anaesthetic -- just an inexorable falling asleep.
Posted by A latte beckons at 12:53 PM