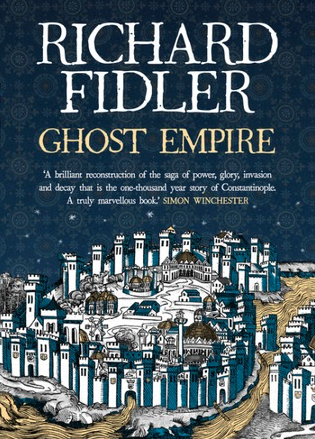 I picked up Ghost Empire from Brotherhood Books and I feel as if I've been reading it for a long time -- but a very engrossing, entertaining time it's been. The Byzantine Empire is a huge hole in my historical knowledge, a vague impression of golden icons, labyrinthine politics, and purple shadows. Richard Fidler's masterly and very readable history of this thousand-year empire has finally shone some light on this dark corner.
For instance, I had no idea that when Emperor Constantine moved his base to Constantinople after the sack of Rome in 330 (well, let's face it, I had only the haziest idea that that was how Constantinople started in the first place) that he and his successors still regarded themselves as Romans, albeit Christianised Romans -- right up until the city and empire was lost to the Persians in 1453, they were still calling themselves Romans! 'Byzantine' was a label slapped on them by later chroniclers.
As anyone knows who has listened to Fidler's Conversations series on the ABC, he is the perfect companion for a journey like this -- intelligent, lively, and well-informed. He leads us through a complex and confusing history with a solid rope of fascinating anecdote and piquant trivia (apparently the Emperors all wore special thigh-high purple boots -- so very disco!) and threads through an account of a trip to Istanbul with his teenage son which brings a personal angle to the uncovering of history. (Joe sounds delightful, too.)
At nearly 500 pages, Ghost Empire was a big commitment, but it's well-illustrated and broken up into bite-sized chunks. Well worth the effort, and I think I might look out for Richard Fidler's books about Prague and the Icelandic sagas, too.
Posted by A latte beckons at 9:07 AM