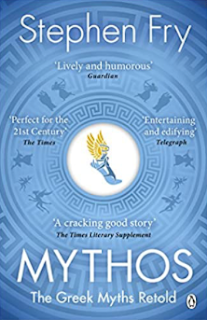 Every generation needs its own re-interpretation of these ancient stories of the Greek gods and goddesses, which, together with the Bible, form the bedrock foundation of Western culture. Who better to hold your hand through this complicated landscape than Stephen Fry, erudite, funny, articulate, a lively companion who is quite prepared to throw in a footnote about language development or his own personal history if it will illuminate the stories he is telling? Prometheus stealing fire for humanity, the war of the Titans, Pandora's box (or jar) of evils, Midas' greed backfiring as literally everything he touches turns to gold, Pygmalion falling in love with his own creation, Narcissus and Echo -- these stories are part of the fabric of our history and art, a common language of the West.

Mythos was such a hit with the younger daughter that she has gone on to devour the follow-up volumes, Heroes and Troy. Even as I write this, I'm thinking that I can see a gap in the market for Fry to re-tell Bible stories in the same way -- I would have loved my kids to have the same basic knowledge of Biblical myths and stories as the younger one has been able to gain about Greek myths from this book, though I was too wary of the religious baggage that goes with them to do much about passing them on myself. The stories of the Garden of Eden, Noah's Ark, the wisdom of King Solomon, David and Goliath, the parables of Jesus, are also part of the assumed knowledge that's been carried through our European cultural history, reference points for art and literature that a lot of secularly-raised kids today won't understand. Or maybe that's just my children.

How about it, Stephen?