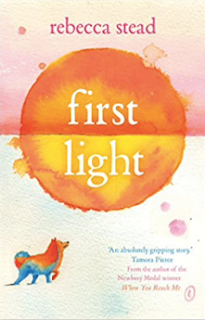 First Light was Rebecca Stead's first novel. It's not as perfect as When You Reach Me but it's still pretty good. The book is told from two perspectives: Peter, who has travelled to Greenland with his scientist parents, and Thea, who lives in a mysterious community beneath the surface. Inevitably Peter and Thea's lives collide and intertwine.

I enjoyed many aspects of this novel -- the frozen world of the Greenland ice, the mystery of Peter's mother's depression, the beautiful clever dogs, the strong women of Thea's family, the gifts of ear-adept and eye-adept. But I did have a major problem, which was that I had a lot of trouble, particularly early on, in visualising Thea's 'cold world.' It wasn't clear to me for far too long (I'm sure this was my fault, not Stead's) that she and her community lived in a world carved under the ice. For a while I thought they lived on another planet, or in a parallel reality, and it wasn't until much more of the society's backstory emerged that I understood how they had come to live under Greenland's surface.

You can see in this book some of Rebecca Stead's great strengths beginning to flower -- complex, intertwining plot lines, sympathetic young characters, and a fully realised fantasy world. I've seen First Light described as science fiction but I think I would class it as fantasy -- it certainly had much more of a 'fantasy in the real world' feeling to me, though its underlying climate change message is more pertinent than ever. It was also fun to discover a blurb from my old mate Kirsty Murray on the cover!