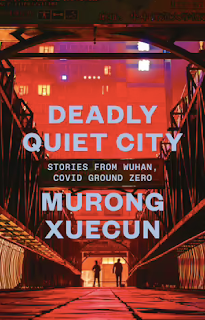 I borrowed Murong Xuecun's Deadly Quiet City from the library after seeing it mentioned on Crikey (my go-to news website). Wow, what a read. It recounts the first hand stories of Wuhan residents in the very first days of the pandemic, before anyone knew or admitted that it was a pandemic -- stories gathered at great personal risk by Murong Xuecun, whispered in hotel rooms and smuggled out of the country, told by people who still feared the repercussions if it was discovered that they had spoken: in the parlance of the Chinese Communist Party, 'made mischief' and 'stirred up trouble' or 'supported foreign propaganda.'

The stories these citizens tell are truly hair-raising. There is a wide variety of experiences here -- a hospital cleaner, a grieving mother, a doctor, a volunteer at a health station, a defiant rebel. Some remain faithful to the Party despite everything they've gone through, others became totally disillusioned, others were always inclined to be suspicious of power. But all their stories of the chaos and cover-ups, the desperation and horror of those early days, are vivid and terrifying.

Deadly Quiet City includes an appendix timeline compiled by Australian academic Clive Hamilton, which has really convinced me that the 'bat in the wet market' line doesn't really stand up, and perhaps the 'virus escaped from the lab' story might be the correct one after all. But Deadly Quiet City isn't just a book about a breaking pandemic -- it's also a book about what it's like to live in China, in a tightly controlled society, many of whose members are content to trade personal freedoms for security. As a person who inclines towards favouring safety myself, it's made me think twice about the costs of living under a one party state.