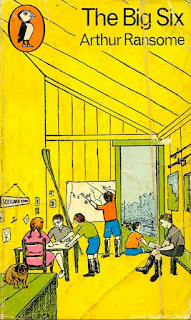 Back on the Norfolk Broads, it was a pleasant surprise to find The Big Six much more enjoyable than I remembered, though again there is a bit of a slow start while the mystery is set up and the crimes committed. But once the Ds arrive, the story picks up pace. This really is Dorothea's shining hour. It's she, with her novelist's gaze, who has the psychological insight to predict what the villain will do next.

'You'd never think that Dot got such a head on her,' said Bill, as they climbed over the fence.

The three young Death and Glories are agonisingly slow to realise that they're being framed, and the reader (along with Dot) solves the 'mystery' much more quickly than they do; however, the delight of the plot is in trapping the villain and gathering the proof, rather than guessing whodunnit. It was rather shocking to be reminded what a faff taking photographs used to be, in the days before we could whip out our phones -- the flash, the exposure, the shutter speed, the chemicals, the darkroom -- it's slow and fiddly and cumbersome and frankly I'm not sure I could be bothered. Perfect for Dick, though.

The Big Six (named after the 'Big Five' murder detectives of Scotland Yard, though this is never explained in the book) is a lot of fun.