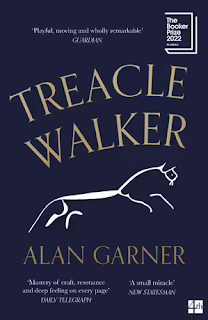 I was so excited when Alan Garner was nominated for the Booker Prize -- at 87, this may have been his last chance -- and I was disappointed when he didn't win it. However, having now read Treacle Walker, I have to agree with the critic who said while Garner may have deserved a Booker Prize, he didn't deserve it for this book. (I think The Stone Book is his masterpiece.)

Having said that, Alan Garner is a writer whose books are difficult to evaluate in isolation. He has said himself that he regards his novels as being one work, spread over a lifetime, ranging from the high fantasy of The Weirdstone of Brisingamen all the way to this sparse, elliptical work, which is closer to mystical poetry than a narrative novel. Barely 150 pages long, broken up with lots of blank space, this is a very short book indeed; and yet for readers of Garner's other books, it is dense with references, resonance and echoes of other stories, dancing on the edge of dream and reality. Perhaps the entire book is a fever dream; perhaps Joe is dying or actually dead; almost certainly Joe is an echo of Garner himself as a young boy, who spent much of his childhood ill in bed, reading and dreaming himself into stories.

Some readers have complained that there is no plot to this book; I don't agree, though the events are strange and enigmatic. Joe seems to live alone, we never see his parents or any other family, though he does take an eye test at one point. He encounters two mysterious figures, the wandering Treacle Walker and the bog-man Thin Amren, and I like the interpretation that these two characters also represent aspects of Garner himself -- Treacle Walker, the educated intellectual who went away to university, and Thin Amren, the deep-rooted Chesireman, steeped in folklore and fixed in place.

I'm not sure someone unfamiliar with Garner's body of work will find satisfaction in Treacle Walker. Some have called it obscure, self-indulgent, inaccessible, nonsensical, messy, incoherent. I enjoyed it and I will read it again. I've found this is essential to get the most out of Garner's recent work -- should this be necessary to enjoy a novel? Let's just say this book won't be for everyone, but for Garner's fans, this will be a deeply rewarding, meditative delight.