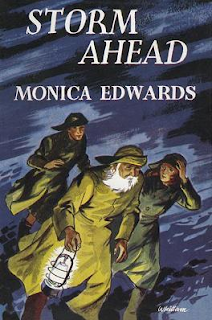 Storm Ahead by Monica Edwards was the other book I brought with me for my long train journey a couple of weeks ago. I ordered it from Girls Gone By, though I've never read it before, because it's part of the Romney Marsh series. As a kid, I absolutely adored the first two books in the series, Wish For a Pony and The Summer of the Great Secret, which I borrowed over and over again from the Mt Hagen library, and 'dreamed' about night after night while I was falling asleep. Having re-acquired and re-read them as an adult, I'm left faintly bemused by the source of my obsession. They are fairly standard pony books, albeit with attractive heroines in Tamzin and Rissa. I think it was the stable (see what I did there...), cosy and safe world that the girls inhabited that appealed to me most at a time when my family was moving fairly frequently.

Ironically, in Storm Ahead, the security of the village is threatened by wild weather. The book is based on a true and tragic incident which Edwards witnessed as a teenager, the loss of a lifeboat with all hands drowned, and the catastrophic flooding of the village. (The last element was particularly apt, as the train moved through flooded country around the Murray.) The action takes place over a hectic couple of days as the storm and flood sweep over the village, though there is a semi-optimistic ending suitable for a children's book as the young protagonists get to play Father Christmas to the stricken village children. Storm Ahead is also a crossover story, featuring Lindsey from Edwards' other popular series, Punchbowl Farm.

The writing is a bit more stilted than I remember from Edwards' other books (I think I can still quote bits of Summer of the Great Secret by heart!) but it was still a lovely nostalgic read, albeit with a grim event at its centre. The biographical notes provided by GGB were fascinating and definitely added to my appreciation of the story. Weirdly, another book I'm reading concurrently, Our Castle by the Sea, is also set on the Kentish coast, and also features a church with a roof 'like the hull of an upturned boat,' based on the real Rye Harbour church. More on Our Castle later...