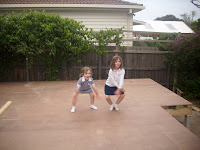 We're building (or rather, paying other people to build for us) a big new living/dining room at the back of our Californian bungalow. As extensions go, it could hardly be simpler - it's just an box of an addition, no demolition, no plumbing. So for the last few weeks, we've enjoyed a succession of new spaces.

At first it was a dance floor outside our back door, a stage, a platform for performances. 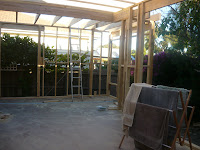 Then, when the frame went up, it became a patio, open to the sky, where we could sit in the sun and read and drink beer, paint pictures and set damp towels out to dry in the fresh air.

As the walls closed it in and the roof was laid, it became a magical cave, where we could peer out at the garden through the gaps where the windows would be.

And today, as the last of the big windows was manoeuvred into its frame, it's become almost a real room. We can see where the TV will hang, where the couch will go. We can stand in the nook where the window seat will be and gaze out at the riot of bouganvillea just beyond the glass, and imagine the days when we can curl up with cushions and a book. We realise that there will space for a sideboard along that wall after all.

Living with the new space as it grows every day, we're getting to know it gradually, learning how the light falls, discovering new views. It's only one room, but it will change the way we use the rest of the house, too. The present cramped living-room will become a quiet, darkened study and library, a room for adults to retreat to and children to hide away. The kitchen will open out. We'll have room to build railways and cubbies, a long bench for jigsaws and model castles, storage for games and blankets, and a table where we can eat and be warm and see the TV all at once (yeah, okay, we're bogans, get over it).

It's not a new house. It's better than that.