School's Out For The Summer!* 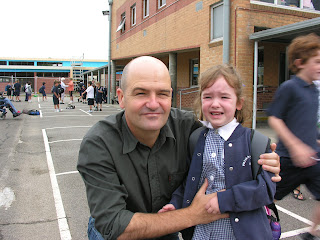 It's been an eventful year in our household. For the first time, both girls are going to school, which took more adjusting to (for me!) than I expected. We did our big renovation, which has transformed our house from a poky, cramped living-space to a glorious place to hang out. One of the best things we did was get a great big tank; it might not save us massive amounts of money, but oh! the smug is priceless.

The Western Bulldogs came fourth - beaten in the prelim again! - but we had a bad run with injuries, and with Bob Murphy at the helm (maybe??! nah, probably Boyd), 2011 will be our year. Fingers crossed.

I've kept up my record of a book a year (just) with Dear Swoosie coming out in January - the funnest book I've ever written, thanks to the divine Penelope (who also had a big year) - and definitely the fastest. Cicada Summer was short-listed for the PM's Literary Award, which was a huge thrill, and even better, I've had lots of wonderful feedback from readers who love it.

In same ways I've felt as if I was treading water this year, but it's not really true. Behind the scenes, a lot of work went into Crow Country, and I'm really excited about it being published next year, the most excited I've been about any of my books since The Singer Of All Songs. And Independence has also been chugging along quietly, slowly taking shape, being pruned and moulded and fertilised. Yesterday I had one of those eureka moments when a veil falls and suddenly a whole lot of things become clear...

... just in time for school holidays.