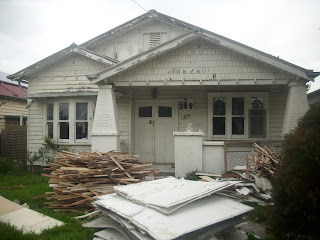 Ancestral Home
This is the house my mother grew up in. It's a few streets south of my family's current home. In the forties, my mum went to the same primary school that her grand-daughters now attend, sixty years later.

I often drive past Mum's old house, but I've never set foot inside. By the time I was born, my parents were staying in my great-grandparents' old house in Preston (a few streets north of where I live now), and Mum's parents had moved to Cheltenham. But this old house is a shabbier near-twin of my own Californian bungalow - the same bow window, the leadlight glass, double doors, gables, the same squat pillars to the verandah. 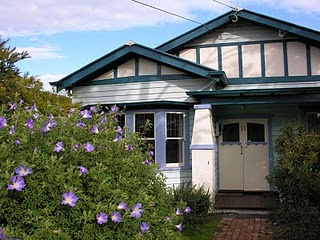 For the past few years I've watched Mum's house slide into neglect, the garden tangled, the paint peeling, and wondered when someone would make a move. This suburb has been overwhelmed by a tide of relentless gentrification, and the shabby houses have been picked off (rescued?) one by one.

On Friday I drove past and saw with a shock that it was happening at last. The guts had been ripped out of Mum's house and piled in the garden; its bones were exposed, the doors gaping wide. I pulled over, telling the girls, 'I have to look inside.' They didn't want to come with me - Evie was scared of getting into trouble, and Alice wanted to examine the stash of new books we'd just acquired, so I went in alone.

I found an elderly couple, ankle deep in a sea of plaster and ancient insulation. The walls had all been torn down to the frame, even the ceilings were gone, except in the front two rooms where gorgeous plasterwork remained. Haltingly I explained myself. Their English was poor, but they smiled and allowed me to pick my way between the ribs of the house, to peer at what was left of the rooms my mother had described - the once-sunny sitting room, the tiny bedroom she'd shared with her older sister, the pocket-hanky bathroom, the walled-in sleepout off the kitchen. The house looked as if it had remained structurally untouched since the 50s. But from the devastation, I guessed all that was about to change.

Later, on the phone, Mum sounded sad. Could I go back and salvage her a keepsake, she begged? A chunk of plaster, or a doorknob? So that afternoon, armed with a camera, Alice and I returned. The elderly couple had gone home and the house was locked up. I hopped the fence and took some photos. ('You're trespassing,' warned Alice.) From the heaps of stripped timber and plasterboard that lay in the front yard, like the flesh from a chicken's carcass, I peeled a small strip of wallpaper that seemed very like my grandmother's taste - pink rosebuds and golden curlicues. I found a smashed chandelier, and pocketed a fragment. The long moulded cornices were too robust for me to snap off a section, though I tried. (Alice was scandalised.)

But when I described my finds to Mum, she was dubious. 'I don't think we had wallpaper like that. I can't remember a chandelier. Our bath wasn't blue, it was white. We didn't have an inside toilet. We didn't have tiles around the heater.' In the fifty-odd years since she'd lived there, the house had been redecorated, rearranged, overlaid with other people's memories, other people's lives.

Sentimentally, I'd thought it was Mum's memories that the present owners had pulled apart, pieces of Mum's home that were discarded in the yard.

But that house was already gone.
Posted by A latte beckons at 9:49 AM