What Else We've Been Reading 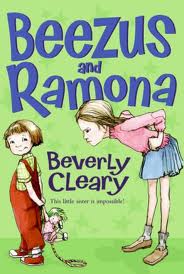 I picked up a few Ramona books years ago at the library sale but never thought of reading them to Evie until now. I missed out on them myself as a child so I didn't have that tide of nostalgia to sweep me along. But after we'd read all the Winnie-the-Pooh we had in the house, I needed something to fill the gap and spied these on the shelf.

I was partway through the first chapter when I noticed that Alice had crept in to listen as well, and since then (we're now halfway through Ramona the Pest) I have been reading mostly to an audience of two. There aren't many books that can hold both Alice and Evie equally enthralled, so Beverly Cleary is clearly onto something special.

It's hard to believe that these books are over fifty years old. Though they have dated in small ways, little sisters still annoy the hell out of big sisters, and big sisters still boss little sisters around. Sisters struggle to love each other all the time (or even some of the time!) Mothers still say, 'Don't make me count to ten...' and fathers still ask, 'Did anything come in the mail?' as soon as they walk in the door (at least they do at our house. But then, we do have a very fifties family...)

I see there was a movie made last year. We won't be watching it. I would hate to spoil the lovely straightforward charm of the stories with dollops of contrived Hollywood saccharine, which I'm sure the film-makers couldn't resist. Anyway, long live Ramona!

Meanwhile, I've also been reading A Stranger At Green Knowe to Alice. I dimly remembered reading this as a child and dismissing it as 'weird' and somehow not in keeping with the other Green Knowe books which I adored, so I'd never reread it. But this time around, it has kept us both absolutely spellbound. This is the book in which an escaped gorilla comes to Green Knowe (I know, it does sound bizarre). Ping, the refugee boy, manages to keep him hidden in the thicket for several days before Hanno's brief taste of freedom is inevitably, and tragically, cut short.

I'd forgotten that Alice feels such a strong affinity with our primate cousins. She fell in love with Iwani, the baby siamang, whose upbringing was chronicled in The Zoo, and she is fascinated by all the apes and gibbons. The descriptions of Hanno, as a baby gorilla in the wild before his capture, mutely raging against his captivity in the zoo, and savouring his taste of liberty in Toseland Thicket, are powerful and moving.

Hanno and Ping are both exiles, both displaced persons, and both find a refuge in the particular sheltered sanctuary of Green Knowe. There is no time-travel in this book, no ghostly encounters, but Ping and Hanno's doomed relationship has its own magic.

Because we've read the book that follows this one, we knew what was going to happen. Alice made me stop reading a few pages before the end, 'so that in my mind, Hanno stays there forever.' She said, 'Stop now!' and slipped away. And I read the ending, and I cried.
Posted by A latte beckons at 11:27 AM