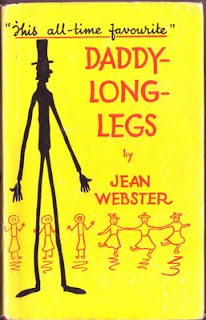 This is the cover of the book that I read when I was a kid - about nine, probably - I think there was a copy in the Mt Hagen library. I couldn't remember much about it, except that it was written in letters and even I could foresee the Big Twist coming at the end. Perhaps that's why I felt slightly dismissive of it and didn't reread it, which was a rare event back in them days.

But recently I found a copy and gave it another go, and it was just delightful. Yes, it is a little creepy that Judy addresses her anonymous benefactor (and eventual SPOILER! love interest) as 'Daddy' throughout, but hey, it was written a hundred years ago! And it was sweet. I'd completely forgotten, or more likely it hadn't registered in the first place, how lively and funny and brisk (if rather dense) a narrator Judy is - and surely her denseness is intentional, to give us readers a smug shiver of anticipation, as we can so clearly see what Judy can't.

And it's feminist too: 'Don't you think I'd make an admirable voter if I had my rights? I was twenty-one last week. This is an awfully wasteful country to throw away such an honest, educated, conscientious, intelligent citizen as I would be.' Yeah, you go, Judy!

I was shattered to learn that Jean Webster, who was an orphan herself and presumably wrote from experience, wrote only one more book after this one. She married at 39 and died in childbirth. How awfully sad, and what a waste indeed.

What Everyone Is Reading At Our House