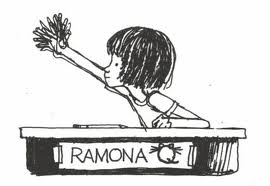 Evie has asked me to re-read the Ramona books to her and we're racing through them. The process is made swifter by the fact that this time round Evie knows which chapters she wants to skip - the scary ones, mostly. (There's not going to be a book called Evie The Brave any time soon, let me tell you.)

The Ramona books are about the only books featuring human beings, rather than talking animals, that Evie really enjoys. I think the main attraction is the fact that Ramona is a little sister, just like Evie. During the earlier books, when Ramona is a pest, Evie will ask, 'Did I do that? Did I annoy Alice like Ramona annoys Beezus?' Statements like: Her father, her mother, nobody could understand how hard it was to be a little sister, are greeted with heartfelt sighs of recognition.

And Evie always wants to know, 'Was I naughty like Ramona? What naughty things did I do when I was little?' But the sad truth is that Evie was hardly ever naughty. She rarely got into mischief, and if she did, she was prodded or coaxed or goaded into it by her big sister. If anything, in our house, Evie is Beezus, and Alice is Ramona.
But it doesn't matter. The important thing about Ramona and Beezus is that they are sisters, and their relationship is true.