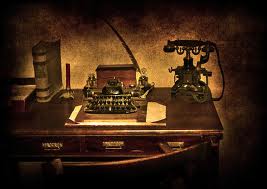 One of the most appealing features of this house when we bought it was the detached (but fully wired up) bungalow in the backyard, which the previous owners had used as an artist's studio. Low ceilinged, but with three windows, it was cosy but full of light, and I instantly claimed it as my study. We painted and carpeted the room and hung up some pictures. It was big enough to double as a spare bedroom, with a double bed, and also fit in several bookcases.

I wrote a handful of books in this room. It had drawbacks; I had to trek across to the house to make a cuppa or go to the loo, or check my emails, and it was very stuffy in summer. Also spiders loved it -- big spiders. But the room's great attraction was its separateness from the main house; even though it was only a few steps away, the psychological distance was significant. I would shut that door, and I was At Work. Not to be disturbed.

Then a few things happened. My younger daughter started school, and we built an extra living space onto the back of the house. This brought the bungalow much closer to the house (well, it brought the back door much closer to the bungalow), reducing the sense of separation. While the builders were working, I retreated to the front of the house with all the intervening doors closed to escape the noise and disruption. I started working on my bed in the front room, with my laptop on my lap. I quite enjoyed this position, in fact this is where I'm sitting right now. The front bedroom faces north and the winter sun streams gloriously through the window, and the view of the wattles in the front garden is uplifting. Also, working in bed (or on bed) feels so decadent, so Nancy Mitford.

When the back room was finished, I took my laptop to the brand new window seat and started working there. I loved the triangular cushion that propped my back at what Stephen Fry assures me is the ideal 45 degree angle. I loved staring out at the trees and the greenery, and the little birds darting down to the birdbath. I wrote most of New Guinea Moon on the window seat.

I had the whole house to myself during the school day, so there was no need to run away to the bungalow to find peace and privacy. The whole house was my workplace! But on the other hand, I missed having a dedicated space where I could dump reference books or papers and be sure that no one would move them. Also, on some days, the living room was so messy that I'd have to spend a precious hour tidying up before I could relax and start working.

So now that the novelty of the window seat has worn off, I'm finding myself craving the luxury of a separate study again. There are a couple of problems: my old table has been co-opted as the kitchen table, and I dislike the heavy, cramped desk that is currently sitting out in the bungalow. I can't wriggle my legs around under that desk, it oppresses me. But it seems wicked to buy a new one. The furniture has been rearranged so that the view from the desk is now gazing back at the house -- boring weatherboards, no glimpse of garden. We'd have to shift everything around again. And a lot more junk has found its way out there in the intervening years -- boxes and a weight bench and an uncomfortable couch. It feels crowded out there now.