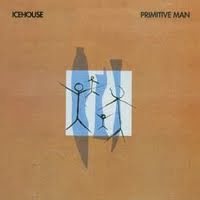 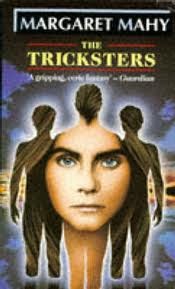 I'm reading Margaret Mahy's The Tricksters for book group. It deals with 17 year old Harry (Ariadne) and is set during a Christmas holiday at the beach, where Harry's family and their friends are visited by a trio of mysterious, powerful brothers - are they ghosts, or aspects of one long-dead man who drowned at the same beach? Or has Harry herself conjured them into being through the novel she is secretly writing?

Fittingly in a novel so charged with mystery, swirling adolescent emotion and powerful magic, I had a bit of a moment while I was reading it. One evening, Harry is left alone for once (apart from 2 year old Tibby, who she's babysitting), and she dresses in a red silk dressing-gown borrowed from her more beautiful sister and dances around the empty house to the music of 'an Australian band,' who sing of 'their own continent -- "living in the summer for a million years."'

As I read this line, I felt an electric shock of recognition, for this lyric is, of course, a quote from 'Great Southern Land' by Icehouse. When I was eighteen years old, I was obsessed with this song, and indeed the entire Primitive Man album. I spent that summer living in a tent, at the beach, with two friends from school. I remember one evening when Jayne and Liza were both out at work and I had the tent to myself for a few hours of rare and precious privacy, I played that album over and over on my tinny cassette player, hitting the pause button every minute or so, to carefully copy down every word of the lyrics in the exercise book I was using as a diary, dreaming, and hoping for love, and experimenting with extreme emotions, just as Harry does.

Primitive Man was released in 1982, The Tricksters published in 1986. Margaret Mahy could well have been writing it during that same summer when I was crouched in our communal tent, my ear pressed to the speaker and my pen poised over my exercise book, squeezing out the magic between Iva Davies' words and suffusing it through my own fevered imaginative life, in the same way that Harry briefly feels she is living her 'true life' in the pages of her secret novel.

Sadly for me, that summer, there was no glamorous and uncanny brother to appear from a parallel world, fall in love with me, and make me feel beautiful and powerful for the first time. But I suppose there are limits even to Margaret Mahy's magic.
Posted by A latte beckons at 11:18 AM