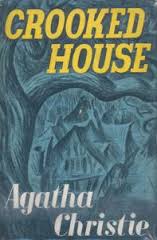 'Stop reading all the time!' cries Alice. 'You read too much. It offends me!'
Guiltily I lay aside my book, but not for long. She's right, I'm too addicted to stop.

Crooked House is the last novel in my 1940s Agatha Christie compendium, and one I've never read, nor, unusually, seen in a TV or film adaptation. (The likely reason for this becomes apparent once I've read it, but I won't spoil it for you...)

I take it to bed on Saturday night, intending to start it before I go to sleep, but I'm besieged by children and in the end I'm too tired to open it. On Sunday morning, a quick skim disposes of the newspaper, and I start to read Crooked House over my (very) late breakfast. The first few chapters disappear. We meet the narrator, and are introduced to his fiancee's extended family, one of whom seems to have murdered the charismatic grandfather...

I hang the washing on the line, tidy the house a bit, make the bed. Alice's friend arrives, with dog, for a playdate with the puppy, which I supervise for a while until it's clear they're all fine. I make them lunch. Lying in the sun on the bed, half-listening to the Grandstand Inquisition on ABC radio, I read a few more chapters. The family members have secrets to hide...

It's a gorgeous day. I walk down to Savers and return with a shirt, my quest for thin cardigans having proved unsuccessful. The friend and her dog have gone. I take my book into the window seat and demolish a few more chapters. 'We're due for the second murder about now,' observes the precocious 12 year old, and sure enough, a few pages later, there's an attempt on her life... But who would try to kill a 12 year old, however irritating?

My children bounce onto me and force me to put the book down. We play a few rounds of the Eye Spy board game until outrageous cheating renders it pointless. Michael has offered to make dinner, and sets off for ingredients. I sneak in another few chapters while the kids are distracted. The chief suspects are arrested, but there's another murder... The lazy Sunday afternoon rolls by.

I take the puppy out to the garden, fold the washing, help the girls gather flowers, grate cheese for dinner. It's TV hour. I demolish the final chapters while I'm eating dinner -- yes, I read at the table, get over it -- and put the book down with a sigh. It hardly seems possible that I've gobbled the whole thing in one day. But isn't that what Sundays are for?
Posted by A latte beckons at 1:04 PM