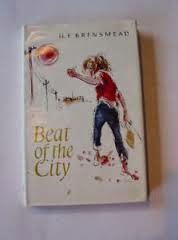 I only discovered this morning that there was a TV miniseries made from the book, in 1975! Now that would be interesting to see!
Posted by A latte beckons at 9:39 AM