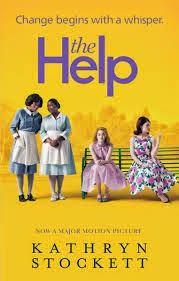 I borrowed Kathryn Stockett's The Help from the library, but the Elder Daughter grabbed it first. As assiduous followers of this blog may know, reading is not easy for the ED, but she persisted with this until the very end, despite its considerable length and the fact that at least half the book is written in dialect -- the stories of the 'coloured' maids, Aibileen and Minny, which form the core of the story. Once I started reading it myself, I asked ED if she'd found the dialect off-putting, but she said no, she liked it, and she felt she could hear the character's voices in her head. I guess that's the advantage of reading at speaking pace, whereas I tend to dash ahead and kept tripping over the language.

I had mixed feelings about this one. I must admit my heart sank a little when I realised the author was a white woman, writing from the perspective of, and literally in the voices of, Black women of 1960s Mississippi. This is tricky territory, as I am all too aware, having faced similar choices about authorial voice while writing Crow Country. Apparently Stockett faced a law suit from her brother's nanny, Ablene, who feels her story has been appropriated.

On the other hand, it's a very juicy, sympathetic, readable novel which (together with the movie made from it) has no doubt led a lot of people to think about history, and racism, and civil rights, when they might not otherwise have done so. Certainly ED, at 13, started asking questions about American race relations, the history of slavery and the struggle for civil rights, as a result of reading this. (Listening to To Kill A Mockingbird recently might have contributed, too.) So I have to say, on balance, that's a good thing.

ED wants me to buy a copy, so she can keep it on her shelf, as the first adult novel she has read independently. And I think I will.