Paranormality: Why We See What Isn't There 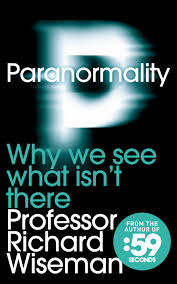 This book was an impulse buy that I gave myself for Christmas last year. It's been sitting beside my bed ever since, so I decided it was time I pulled it out and actually read it.

Paranormality is a fun, informative ride, although it does bear disappointing news for those of us who Want To Believe that ghosts, telepathy and prophetic dreams might actually exist. Professor Richard Wiseman is always entertaining, but strictly scientific in his dismissal of such phenomena. It seems that most seemingly paranormal events are the result of either suggestibility or tricks of the brain. Ultimately, our gift for finding patterns in our surroundings -- such a boon for our survival in the wild, enabling humans to predict and thus avoid various threats and dangers -- means that we literally see things that aren't there. Phantom faces, apparitions, spooky coincidences, messages from the spirit world, are much more likely to be our own senses jumping to conclusions that aren't really justified.

Professor Wiseman includes a whole collection of do-it-yourself exercises to help replicate out of body experiences (drugs not recommended!), successful fortune telling, the appearance of telekinesis and other supposedly 'inexplicable' phenomena, which are highly entertaining in their own right. As a reformed tarot reader, I had to chuckle at the fortune telling techniques he outlined, which were a bit too close to the bone!

I'm recommending this book to my daughter, who took the subject Conspiracy Theories at school last term. I think she'll enjoy it.
Posted by A latte beckons at 11:08 AM